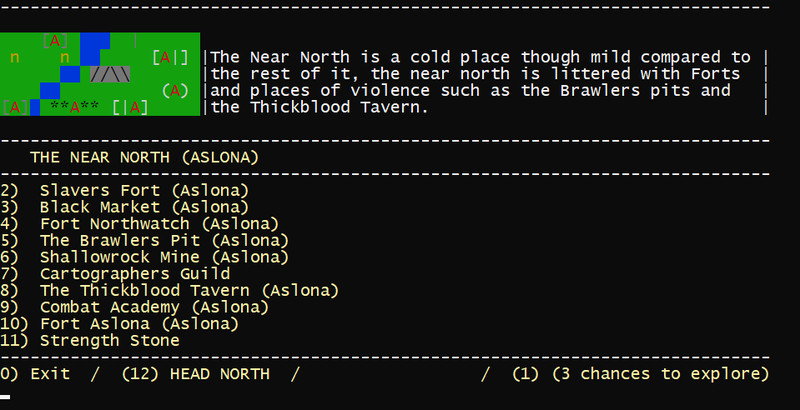 In 'Warsim: The Realm of Aslona' your only goal is to keep the Kingdom of Aslona from destruction and carry it to glory, how you do it is entirely up to you, you may be a harsh dictator charging people for walking and breathing air, or a blood-hungry warlord commanding armies and mercenary bands on invasions and raids of enemy lands, or perhaps a charismatic diplomat who arranges trade routes with everyone from goblin tribes to orcish Chiefdoms.

The goal of the game since early development has been to allow the player to rule and do what they want, with the relevant consequences and perhaps we've gone too far in this aspect. 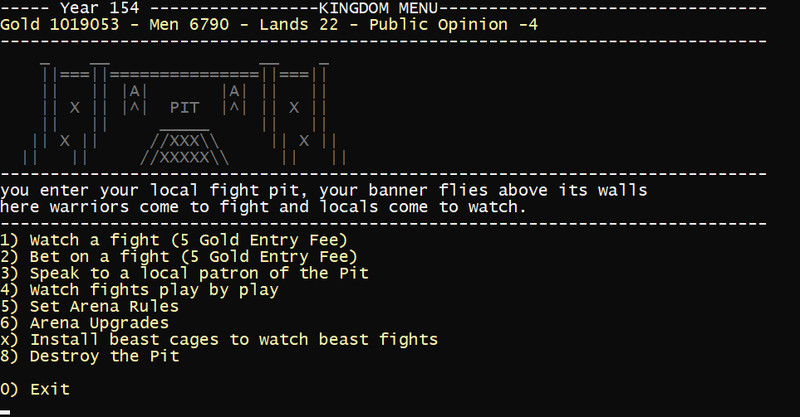 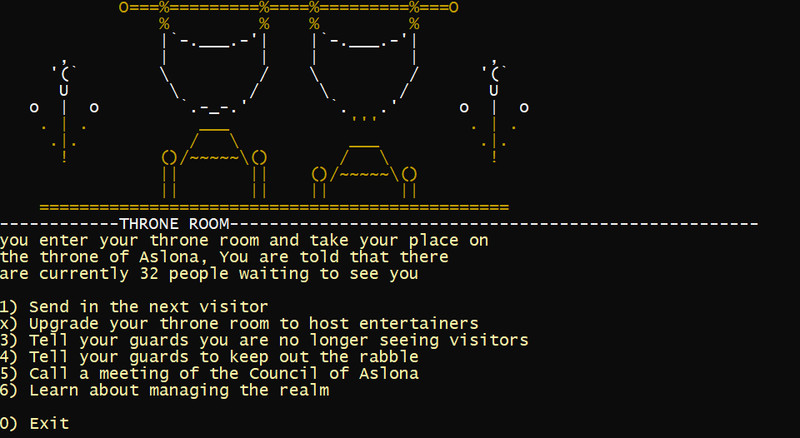 
10/10 would raid the Awoken Hydromancer Exarchate with 10.000 peasants again. This charming little indie game about ruling the Kingdom got me hooked instantly. The text based gameplay and graphics have their own unique feel to them, yet they don't feel or look bad. The story and the world are very immersive, and there's plenty to do in this game.


This game scratched an itch I didn't know I had.

Edit: Wanted to nominate this developer for the the Developer Award during the Autumn Sale, but Steam wouldn't let me search the developer up :/ I seriously can't reccomend this game enough though, the developer listens to his fans, and he updates frequently. One of my favorite hidden gems by far :). Great game, excellent lore and writing. Heaps of stuff to do and explore.. Roguelike + Kingdom Management. Don't let the ASCII scare you away! It's a pretty fun game, pretty complete when it comes to management, you can basically do anything you imagine. Developer seems cool on the boards and updates it regularly, so i would totally advise you to try it out if you like text based games, specially since it's on sale atm.

If you wish to try a demo, theres one in reddit, check for the link in the steam boards!. An absolutely brilliant example of what human imagination can produce.. DISCLAIMER: I got this game in a pick-your-own bundle. I do not know if that counts as free, so I said yes just in case. I did pay for the bundle (obviously).

So far I'm enjoying Warsim. Sure, I've only played a little while, but it's more fun than I imagined.

The soundtrack has a few good songs but is otherwise lackluster.

Obviously it's pretty low graphics, but the writing makes this not a problem. It IS a text-based game, after all, and the text is very well-written. I've found one spelling error and no grammatical errors so far. You can see the care put into some of the ASCII art faces. (Apparently those are randomly generated, but that took a lot of programming for such a small game.)

The gameplay is well done, though I imagine it will get slightly more repetitive in the future. The system is simple enough for a child with a decent vocabulary to understand. Heck, you could probably teach a kid common tabletop roleplaying lingo using this game and a dictionary. It does seem to be mathematically balanced thus far.

Overall, I recommend this for any fans of text-based games, fantasy literature, and ESPECIALLY tabletop roleplayers and wargamers.

UPDATE: I would like to add that, in what little time I've had this game, the developer has released two large, content-heavy updates. He clearly cares about the game, and wants to see it succeed. The developer is putting a lot of work into this, and it's turning out quite well.. I usually don't review games, but I'll make an acception for this.

Warsim is an entirely text-based kingdom management simulater. You can build the world how you see fit and decide how to conquer it. You can be a peaceful human kingdom or a ruthless dictatorship, of course both have thier advantages and disadvantages.

If you like text-based games as well as grand strategy, this is definitely worth a try.

On a side note, it's not as hard to get into as something like Dwarf Fortress, however it provides just as much depth.. Seems overwhelming at first, but it's not that hard to get a hang of. This guy put genuinely good work into it, glad to support this. I followed this game along on reddit for a couple weeks before getting it and I have to say, it is one of the best kingdom management games out there. The amount of detail to races, the infinite amount of bardic songs, the ascii art, and all of the minigames make this game quite unique!

The dev is really responsive to questions and suggestions and he pumps out updates which is really nice. The only bad part of this game are the certain things that are always 100% the same, which make sense that they are but still, after playing it for a long time you can remember exactly those things are and what they do.

All in all a 9\/10! (Really wish the locations could be randomized)