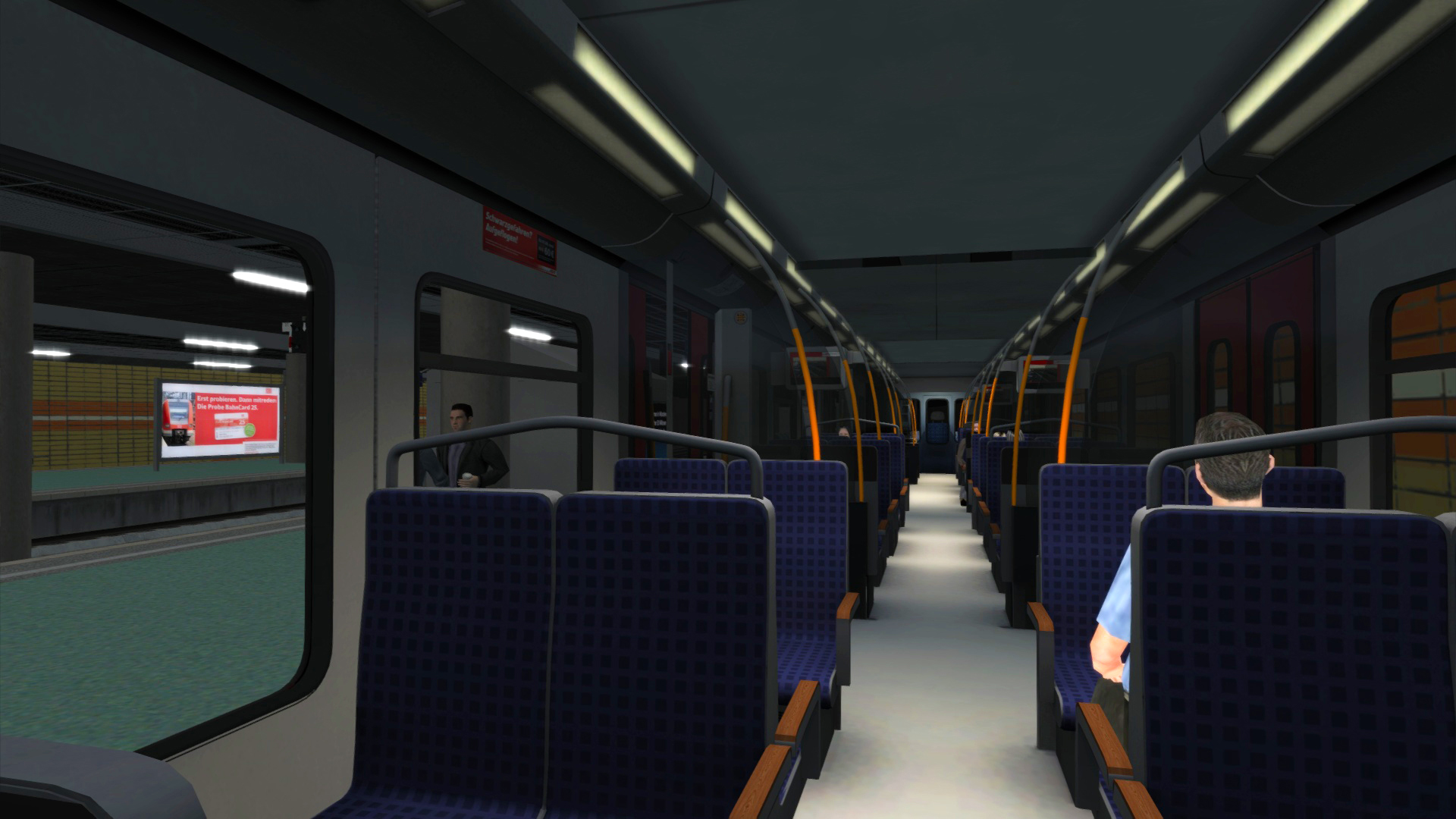 The S1 Line of the Hamburg S-Bahn is the city’s second largest, initially traversing the outskirts before diving into the heart and serving many locations including the nearby international airport. This historic line originated in the early 1900s, and still aids in the movement of people day in and day out. Take command of the ever-busy ‘Mass Transit Metro’ over the Hamburg S1 S-Bahn for Train Simulator!

Life, for what would become known as the Hamburg S-Bahn, began in 1906 with the opening of Hamburg Hbf where steam hauled services would run between Blankenese and the city itself. Despite the railway tracks in this area were not exactly ‘new’, this is the first time that they had been used in ‘rapid-transit’ style operations; as such, the new usage came under the name of the Hamburg-Altona Urban and Suburban Railway.

Extensions of the suburban service quickly followed, allowing connections with Hasselbrook and Ohlsdorf on the eastern face of Hamburg. It was also around this time when the decision was taken to electrify the line, by 1907, electric trains were utilising the, once current, overhead catenary throughout the city. It was at this point, when electricity was the source of motive power that the line fell into what could be categorised as an S-Bahn today. It would not be until 1924 that the Hamburg S-Bahn was so-named however, this occurred once the old Alster Valley Railway to Poppenbüttel was acquired and the route to Wedel was on-lease for suburban use.

By the 1930s, it was decided that the Hamburg S-Bahn could benefit from re-electrification, this time however, using 1200 V third rail. Similar in most respects to the Berlin S-Bahn, the introduction of third rail would provide more versatile power needs as trains and services got faster. The under-side contact method was chosen as standard, and the line saw a whole 450 V increase of Berlin’s offering, to further improve acceleration and performance. By 1939, all overhead was abandoned and third rail dominated the line. It would not be until 1959 that the line to Wedel was acquired and electrified.

In 1965, the Hamburg S-Bahn numbering scheme came into play and saw Wedel – Poppenbüttel, the second longest S-Bahn route, become known as the S1 Line. While the line has held a key importance throughout its life, be it steam powered, overhead-populated or otherwise, it was not until 2008 that the mere purpose of the line would change for the busier. An extension was built out of Ohlsforf station and headed westbound, only one station was on the new spur – Hamburg International Airport, the Airport Shuttle was born. Services would now split to serve Poppenbüttel and the Airport simultaneously, and naturally, a connection with the Airport has seen the S1 become even more vital to the growth of business and tourism within and surrounding Hamburg.

The Hamburg S1 S-Bahn features the 45 km route from Wedel to Poppenbüttel and Hamburg Airport as an extension to the existing 64 km Hamburg Lübeck Railway (also included in this single route totaling more than 100km of German railway). 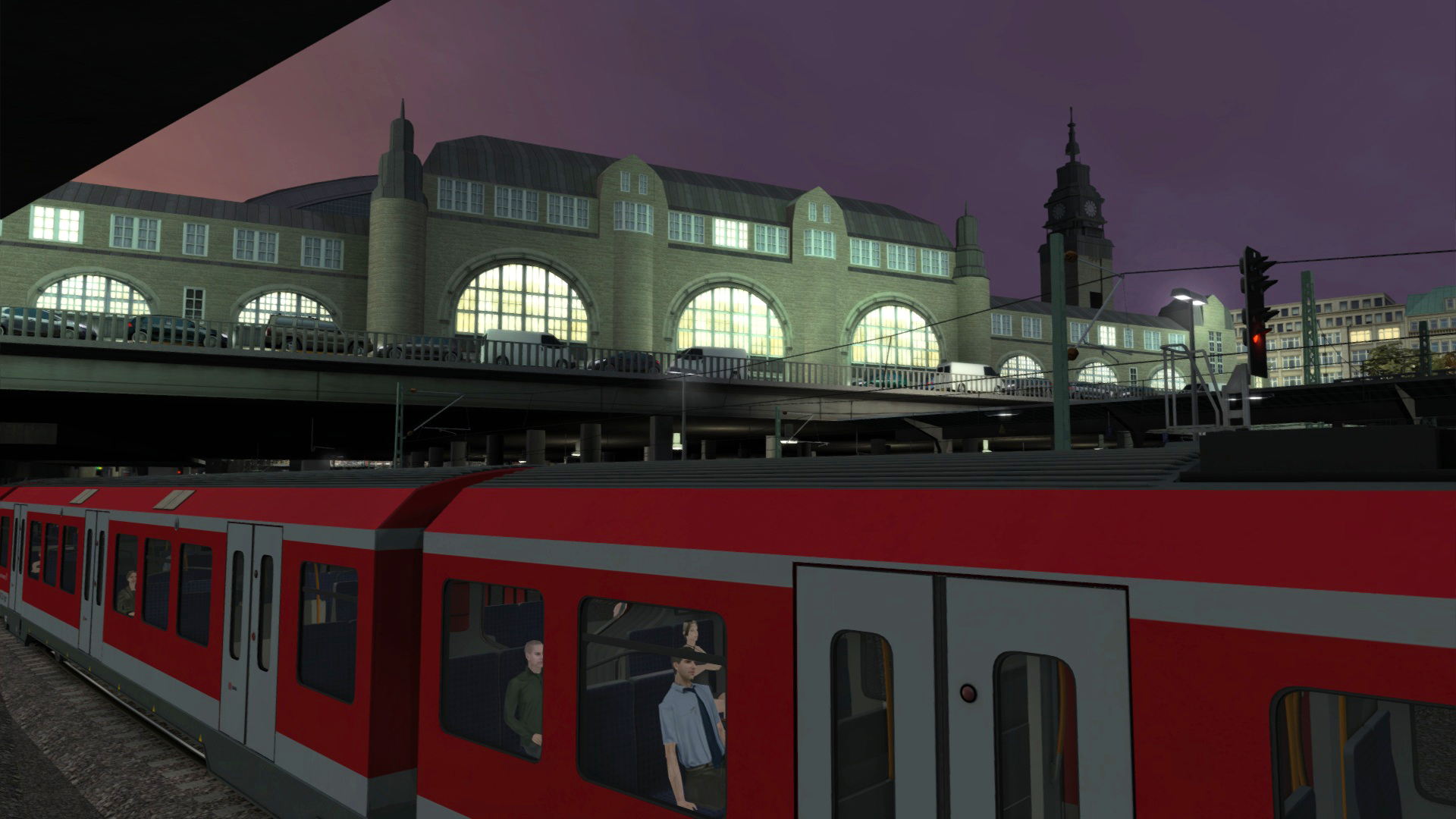 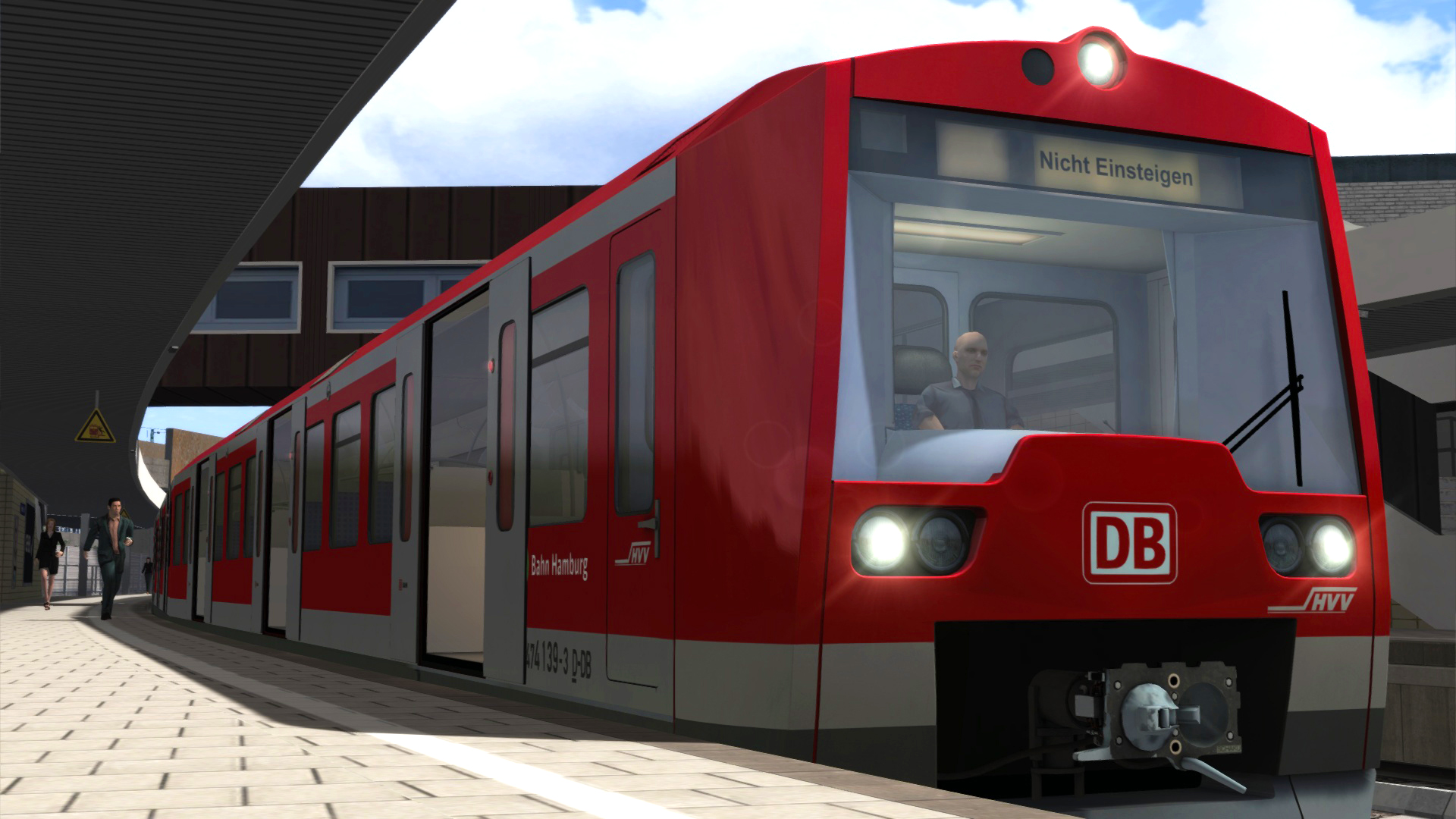 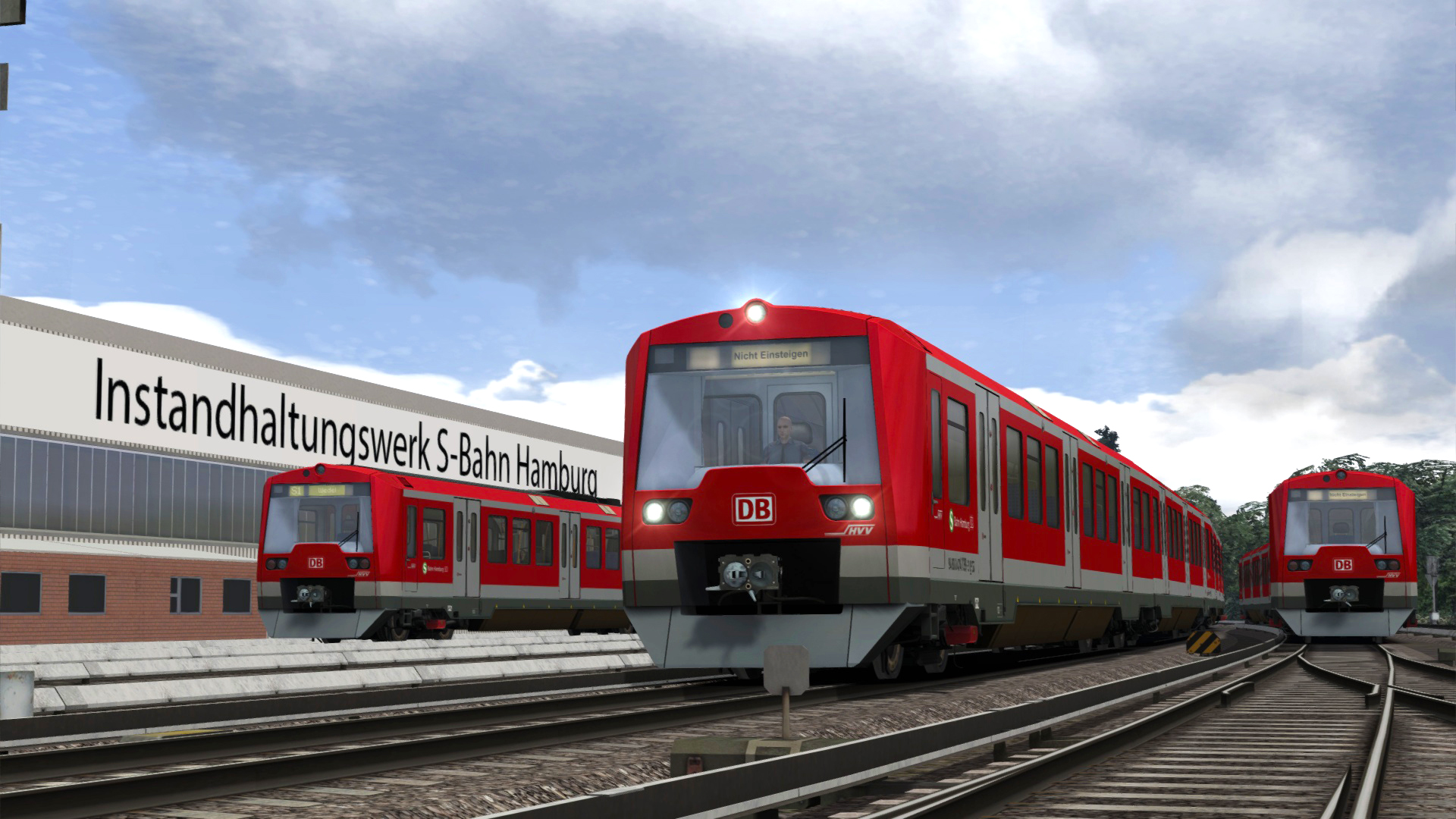 Seems some of the bugs have been addressed with an update, the 474 Plus scenarios run fine, and was able to drive the 474.3 successfuly (on a second try, didn't crash). One of the problems before were many ofl the doors would not open when you hit the platform properly, seems much better now. There is still a signal stuck halfway in the tunnel wall enterning Hamburg Flughafen, but not critical.

This route is VERY challenging, really good for when you want to raise your blood pressure. It is non-stop full thottle drag race out of every station, holding within 1 kph of the speed limit, and then burning into the next stop standing on both the dynamic and train brakes to hit your mark on time.

I will change from a No to a Yes recommend since DTG fixed things up, A unique route, the undergroud stations look very nice, good looking route overall (not that you'll have time to be eyeballing the scenery!).. I am very happy with this route and train add-on. The scenery is very well done. I cannot exactly speak for the train's performance as I have never been to Germany and have not experienced the real train. But I don't think the train is as dreadful as some reviewers would make it to be. It is true that other models such as the 420 and 423 have better braking. But one has to adjust to the equipment he is driving at the time. As a retired real life subway motorman, I found that to be true of real world eqipment. Different trains brake differently. That said, I also very much like the scenarios. I think this entire add-on was well planned and executed. It is well worth the money and I recommend it. I like this track, atypical german setting, with lot of variety.

The train is not perfect, reused sounds and so.
But I got hang of it and it drives ok. You must use brake independently, not only combined power handle.

I do not recommend to use PZB, because of different signals, which have active 1000 hz magnets way too often and it's impossible to keep to timetable as it slows you down too much.

Very resource intensive, game often slows down.. I would not recomend this Add-On reason:

after numerous reinstallation attemps the ingame station of Wedel looks like this.... http:\/\/prntscr.com\/jqt3td<\/a> , frankly i havent been to Wedel station that often since i live around 2 hours away from it and id have to cross through the center of hamburg to get there. Nethertheless I cant remember of the Station and its sourroundings looking like this.

I once on initial release was able to use this DLC the way it was supposed to but there are points that let this DLC down as numerous other people have already stated the train 474\/+ and the classic 474 (seperate DLC) lack indepth controls the sounds are underwhelming and slightly dull... not like in the real world. The driving characteristics of the the trains is off par good rapid acceleration but poor braking performance which is just not realistic.

The Route itself is pretty accurate except for the lack of lights in the stations of the S3-Tunnel (where the S1 also operates on) aswell as lack of animations or quite liturally the bother of the devs clean finish the stations... once again not impressed by Dovetails work and again it seems like a money grab.

I have already contacted support and they either blame my computer and I dont meet the requirements (eventhough my system is way above the minimum requiremts of the game and DLC) or they say they cant help me.... DTG-Support in my eyes has pretty much always had the worst support of gaming devs beating EA by a landslide..

My conclusion, unless your a big fan of the german Suburban rail ne...