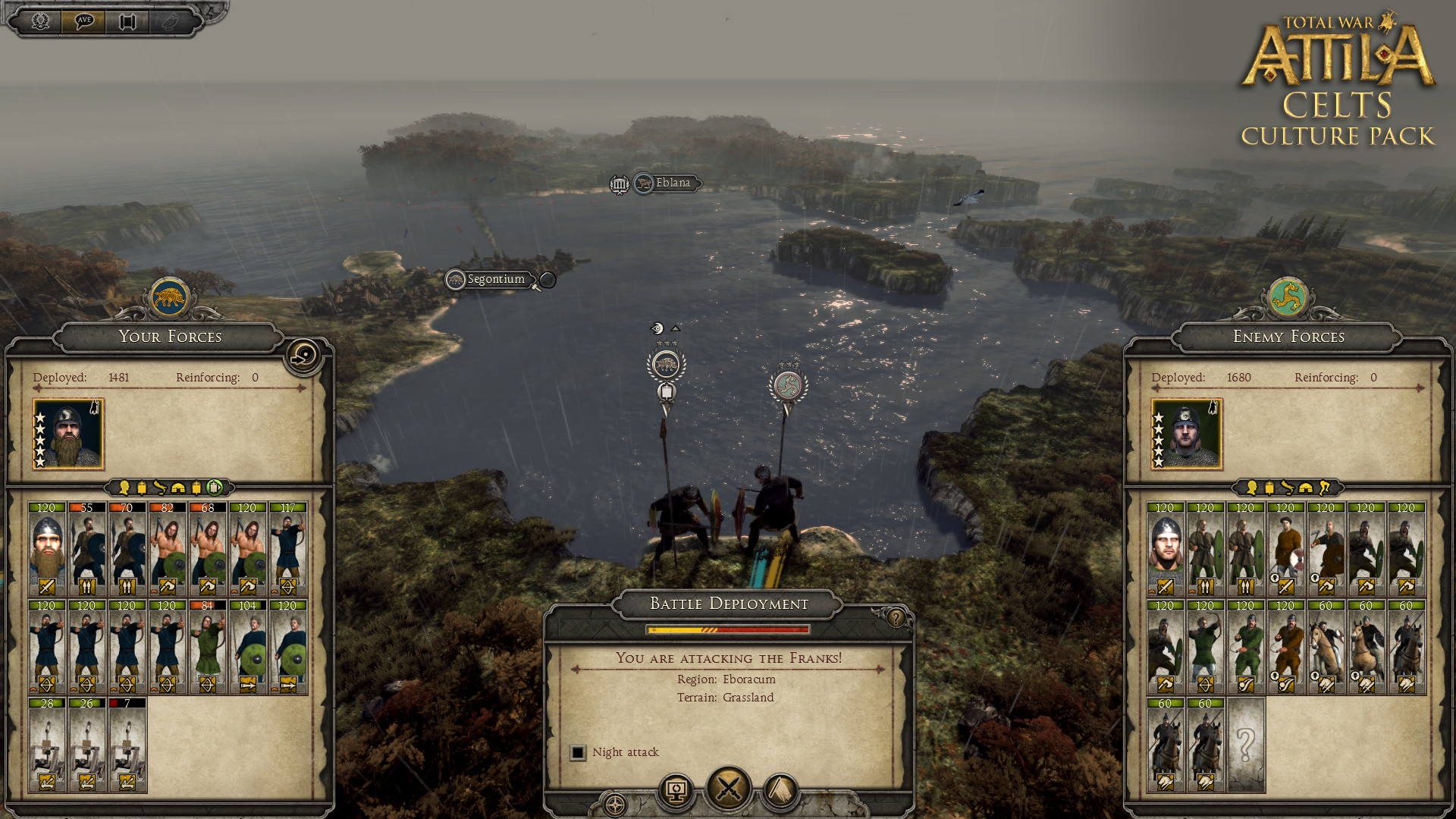 About the DLC:
The Celts Culture Pack brings three new playable factions to Total War™: ATTILA. The Picts, the Caledonians and the Ebdanians may be used in Single or Multiplayer Campaign modes and Custom and Multiplayer battles.

As the grasp of Western Rome weakens on the Britannic isles, these fierce tribes stand ready to proclaim their independence and reclaim their ancestral lands. But even as the empire recedes, others are setting their sights on The Tin Islands. The warlords of Germania and the Nordic regions look to the northwest and see a prize worth fighting for…

Specialising in ambush tactics, all units in the Celtic faction rosters have the Guerrilla Deployment trait. This enables them to deploy every unit in their army almost anywhere on the battlefield – even behind enemy lines. As specialists, Celtic nations should not be expected to perform as all-rounders; an experienced commander will play to their strengths with deadly effect.

Befitting their skilful application of these traits, sacking, looting and raiding are key sources of income for the Celts and this is reflected in many aspects of their gameplay style and the additional bonuses they receive.

Ebdanians
Alongside the common Celtic traits for raiding, the Ebdanians also have a talent for sacking and looting that combined gives them a unique playstyle and unrivalled potential for profiting bloodily at their enemies’ expense.

Picts
As ‘Children of the Night’, the Picts rightfully earn their reputation as skilled nocturnal combatants at land and sea, and may always choose to attack at night. With bonuses to morale in the dark, and a reliance on heavy assault and berserker units, an ambushing Pict army is the literal stuff of nightmares.

Caledonians
Silver-tongued, wily and deadly in the arts of sabotage and assassination, the Caledonians breed individuals of incredible charm, menace and murderous skill. All Agents from this faction are eager to step forward for duty, more efficient in their assigned tasks and far more likely to succeed.


Unique narrative event-chain: Cycle of The Ollam Ri
Playing as these factions will present you with a new series of linked narrative events. The Cycle of The Ollam Ri draws much inspiration from Celtic mythology, and sees you direct the actions of a fabled hero through a series of branching narrative choices. As the tale draws to its conclusion, Ollam Ri himself becomes available as a general for your armies, imbued with traits that mirror the choices you made.

In addition to this standard roster, each faction has its own unique units:

Unique buildings
The resourceful Celts benefit from a unique farming chain that is not reliant on fertility. Enclosures can be upgraded to Cattle Pounds and then a Booley, mobilising self-sufficient herds of livestock.

Characterful of their playstyle, a new raiding chain is also unique to Celtic factions. ‘Raiders’ Assembly Point’ can be enhanced to a ‘Raiders’ Gathering Place’, then a ‘Raiders’ Base’ and finally a Raiders’ Hall’. This quick-to-build chain, each tier of which takes a single turn to build, confers significant bonuses to raiding adjacent regions and offers public order and garrison bonuses, making it excellent for newly conquered regions.

New Mechanic: Prestige Buildings
The Celts Culture Pack introduces three new Tier 5 buildings, unlocked through a new game mechanic. The Bards’ Hall, the Temple of Belenus and the Central Market confer significant bonuses, and alongside the necessary technological requirements, these buildings require the player to meet specific gameplay conditions in the form of great feats in the fields of religion, trade and warfare.

Ebdanians
The Ebdanians hold the seat of power at a tumultuous but opportune moment. Occupying the island called 'Hibernia' by the Greeks and Romans, they were first recorded in the Greco-Egyptian writer Ptolemy's 2nd century AD treatise on 'Geography'. Making their home on the eastern shores, the tribe settled between two river estuaries - the Buvinda and Oboca, approximately where the city of Dublin now lies.

Relationships between clans is what drove barbarian culture and society, as clans intermarried, traded and warred with one another. Tribal life in Gaelic Ireland revolved around the clan, an extended family built on kinship, loyalty and, generally, a common ancestry. Hibernian clans were supposed to have been descended from one man, the authority to rule passing down the male bloodline. This means that most clansmen were of the same blood, although fostering and adoption were as common as in other parts of the world. Clans were led by their chieftain, who sat at the top of a strict hierarchical social structure.

Much like the Picts of Caledonia, the tribes of Hibernia have never been conquered by the Roman Empire, though they have traded with it - as evidenced by the discovery of Roman coins across the island. From their well-positioned, defensible capital the Ebdanians control their own destiny; they could rise to rule over the Celtic world, and none on these fair isles - or beyond - will be able to deny them!

Caledonians
The Caledonians are northern Britannia's first line of defence against Imperial Rome, and bar the way north for any would-be invaders. Although their true heritage has been much debated, they are believed to be an amalgamation of Pictish tribes and those fleeing the Roman advance into Britannia, surviving mostly in a series of hillforts and farms stretching across the highlands of Scotland.

Unfortunately, most historical sources on the Caledonians are of Roman origin, with the usual Roman bias in the reporting; for instance, Tacitus refuses to use terms such as 'king' to describe the Caledonian leader Calgacus, although this may be because he was unsure of their internal hierarchy. They are first mentioned by Tacitus as fighting at the Battle of Mons Graupius, which they lost once the Legions forced them from the hills into an open field battle, as opposed to the guerrilla-style tactics naturally favoured by the rocky terrain. In mentioning the Caledonians, Tacitus also describes them as the stereotypical definition of red haired, long-limbed “northmen” - furious and barbaric to a man.

In the centuries following Mons Graupius, the Caledonians have remained a belligerent thorn in the Empire's side, constantly crossing into Britannia to raid - and often successfully. Despite dogged Imperial efforts, they steadfastly refuse to be cowed, and stand now against a darkening world, poised to take back what is rightfully theirs!


Picts
The Picts are resolute defenders of their homeland, which lies at the far north of the Britannic Isles. The Romans tried for many years to bring them under control - the Emperors Hadrian and Antoninus even resorting to building walls across the country in order to control the passage of, and trade between, Imperial subjects and the savage, tenacious "northmen". The general focus on defence during Hadrian's tenure has led some to the notion that his wall was more than a mere trade gateway - it was intended to keep the Picts and other Caledonian peoples out.

Broadly, the Picts remain an enigmatic people who left no written records behind. However, we know they fought hard and against the invaders because the Roman historian Tacitus made specific references to their defiance in his 'Histories'. It is also likely that 'Picti' (in Latin) was simply a general term used by the Romans for any number of northern tribes whom they considered "painted ones", in reference to the common Celtic tribal custom of tattooing and painting the body before battle.

The Picts were part of the ill-fated Great Conspiracy of AD367-368, when barbarian raids were co-ordinated with the desertion of the Roman garrison along Hadrian's Wall, and almost succeeded in wresting power from the Empire in Britannia and northern Gaul. Now, on the cusp of the 5th century AD, the Picts must rekindle old alliances if they wish to take their country back. Britannia, and indeed the Empire at-large, awaits the outcome - could this be the beginning of a unified Celtic empire in the north, one that will sweep away Roman oppression once and for all? 7ad7b8b382 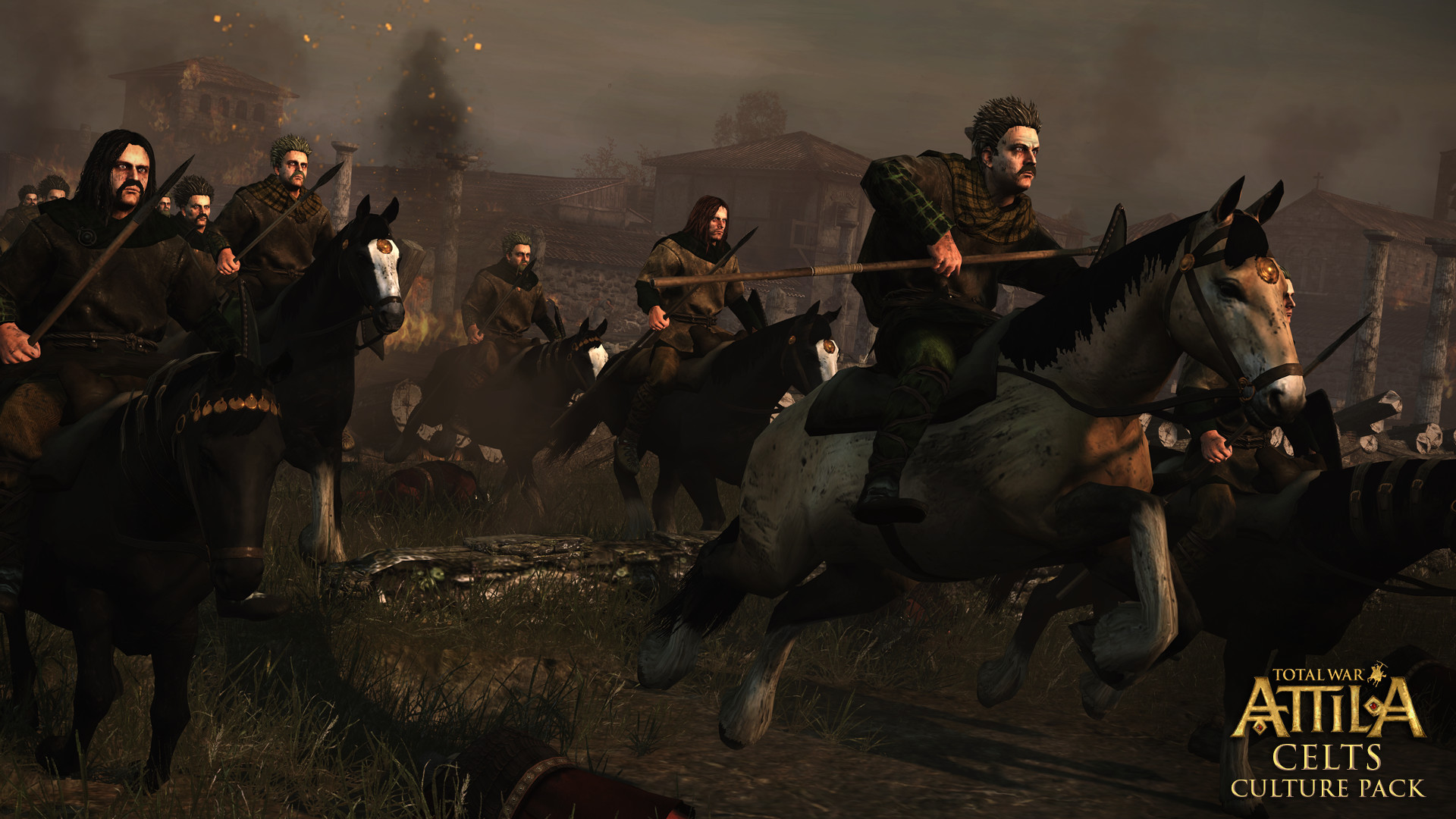 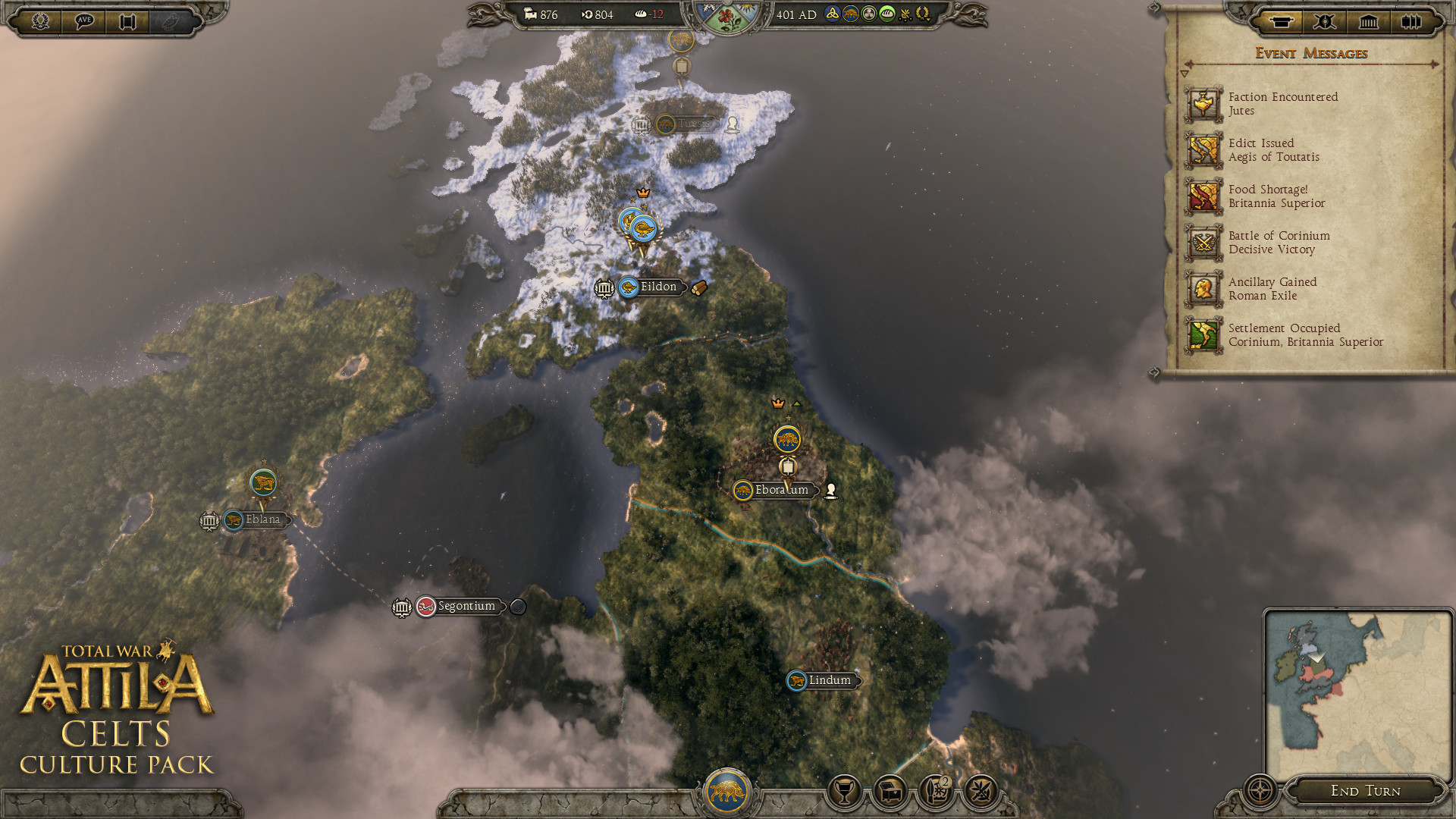 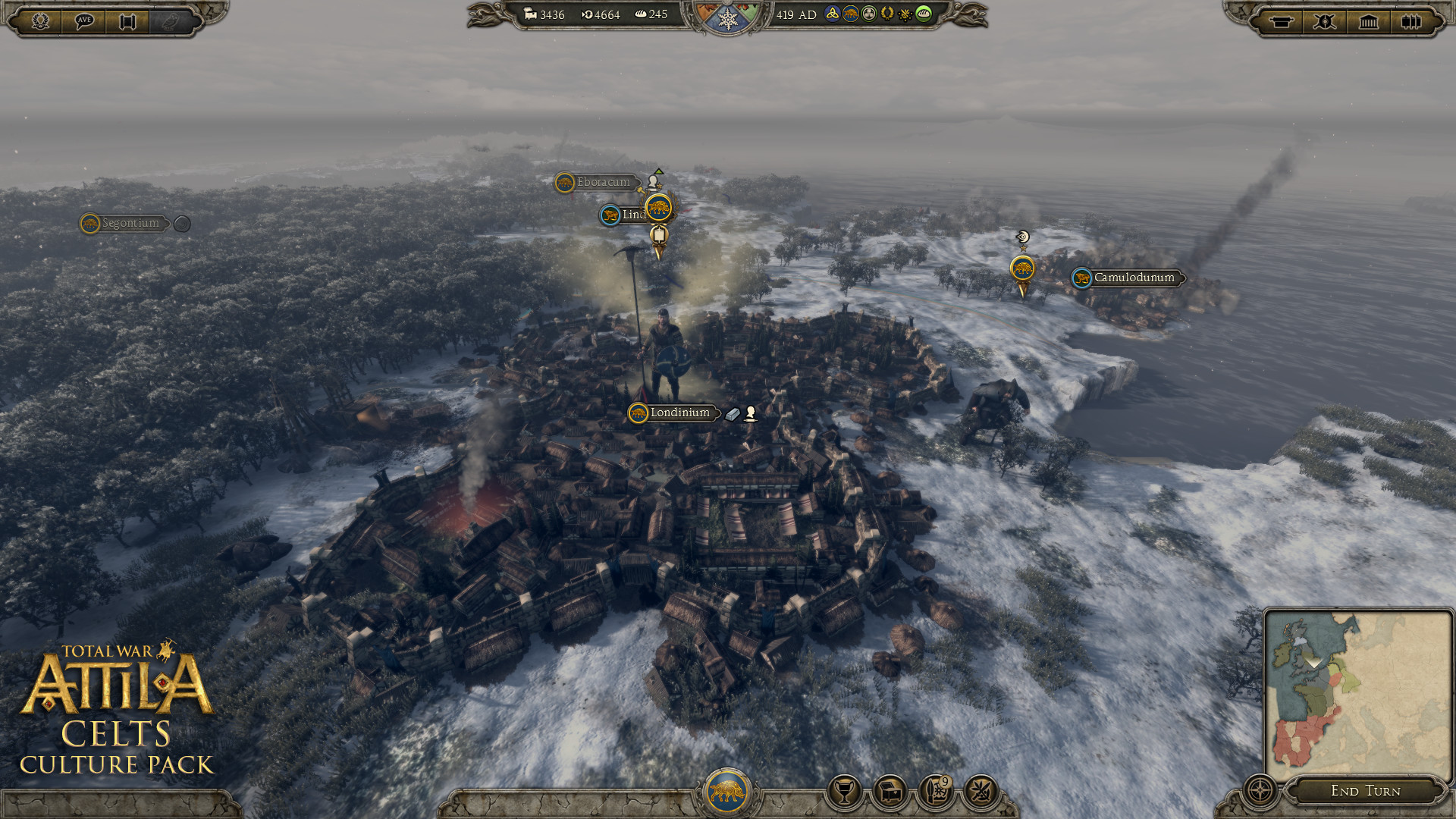 Only problem is, it should really already be in the game

But yeah it's good, definately worth it

PS- I recommend using the Picts :). By far my favourite DLC to come out for total war, disregard what everyone is saying this culture pack stands alone as it allows you to play as 3 different factions that have a far different feel then what was originally attended for the rest of the game and is a game of its own. In this Celtic package you play an alternate role in the side story to Attila total War. Allowing you to raid and plunder the Western Roman Empire with little fear, of Attila\u2019s wrought. I found this game exceptionally fine playing as the Irish this period allowed me to sit back and enjoy a specialised raiding faction at its peak just 200 years short of its golden age. But allowing the player to experience the best of Celtic vengeance. This was by far one of my favourite total war experiences of all time, as I re-expanded a new Celtic Empire, shaped by my own hands. Do not take on the opinions, of people that have not played this DLC and were so quick to judge, fearful that CA were secretly in their cupboards plotting to steal them and their home. I Advise you to go off and make your own opinion of this exceptionally perfect DLC. Which has given me hours of enjoyment.. I dislike Pay-Walling as much as the next guy, however I'd like to thank SEGA and C\/A for stepping up and offering a lot more than "Faction Access" they've created a great game here and deserve rewarding. So long as C\/A submits interesting NEW contect to factions I will continue to buy them. For me, the quantity and quality of this specific DLC should be considered the primay benchmark of expectation for future faction relation DLC packs.

Violent Proto-Germanic Alchoholics, (Celts) Rejoice!. My advice would be Do Not Buy These DLC. They add absolutely nothing to the game. The Celts are all just extra germanic tribes and its virtually impossible to tell the difference between them - they even speak with a germanic accent!

All this does is flick a switch to allow you to play 3 pretty much identical and wholely underwhelming factions that were already in the game - and they charge you \u00a35.99 for that! Its daylight robbery.

Save your money and just stick with the factions from the base game because they cover everything you need.. In my opinion, this is the only culture pack that is worth the buy. The Celtic factions are fun to play with especially with their guerilla deployment for every unit and completely unique unit roster. Unlike all the other culture packs, this one adds a decent amount of new content

+ Some cool looking units that make the celts unique.
+With the ability to be able to deploy all celtic units outside of the deployment zone with the guerrilla deployment, it makes them feel different to other nations on the game.

- I've only found one unit so far not to say the generic barbarian voice and say "Scrappers" or "infanty" when select them. I wish they would say their unit type, like they have in the past with other units.

Other than that i think this pack is good. 10\/10 would play as the celts.