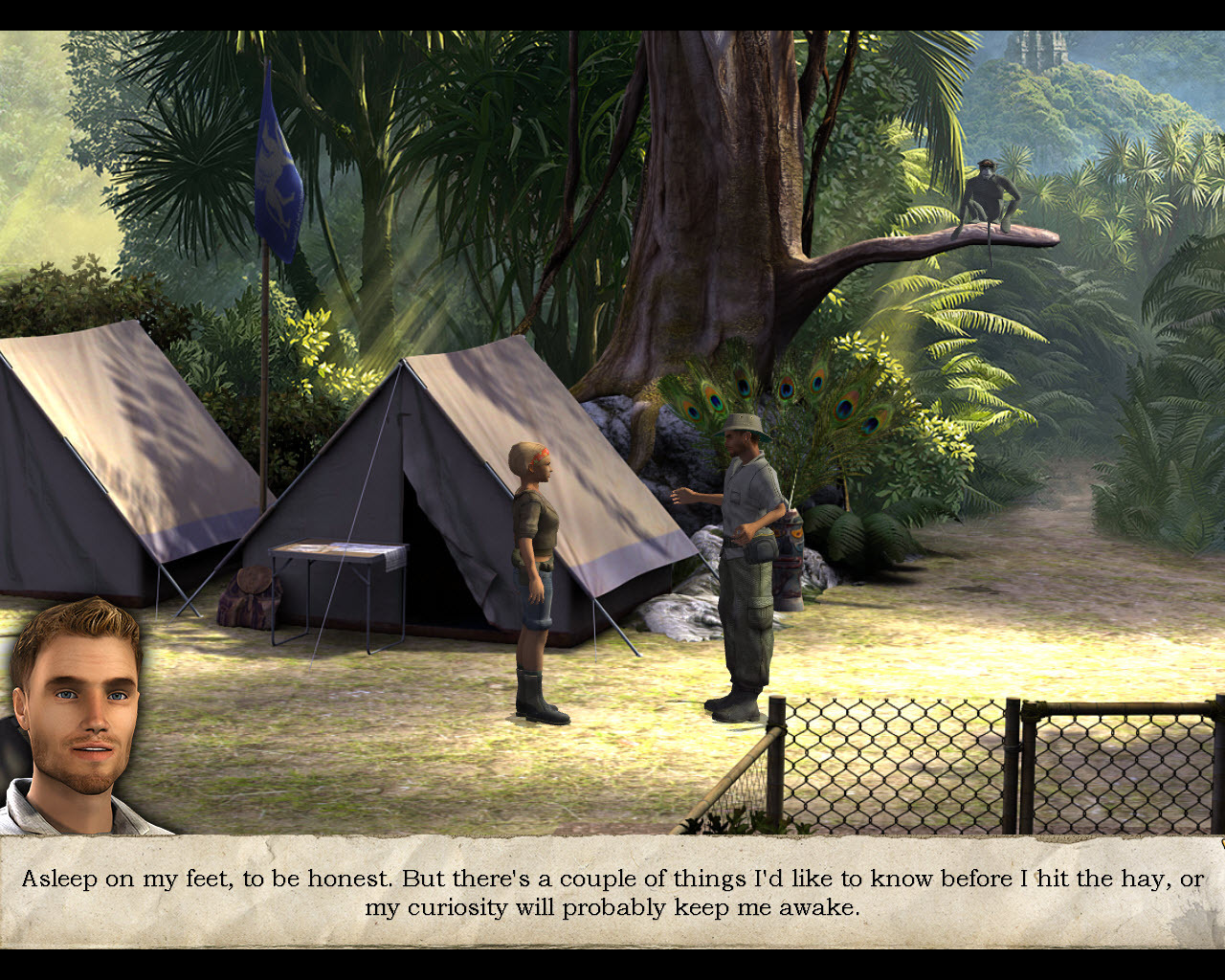 The sequel to the award winning adventure hit Secret Files Tunguska. Famine in Africa, floods in Southeast Asia, economic crisis in Europe, and civil wars in South America, the world is on the brink of disaster. Nina Kalenkow is trying to escape all of this as well as her failed relationship with Max Gruber on a nostalgic cruise to Portugal.
Nina becomes a witness to murder in the Hamburg docks and is soon thrust into the spotlight of events that encompass not only continents but also centuries.
7ad7b8b382 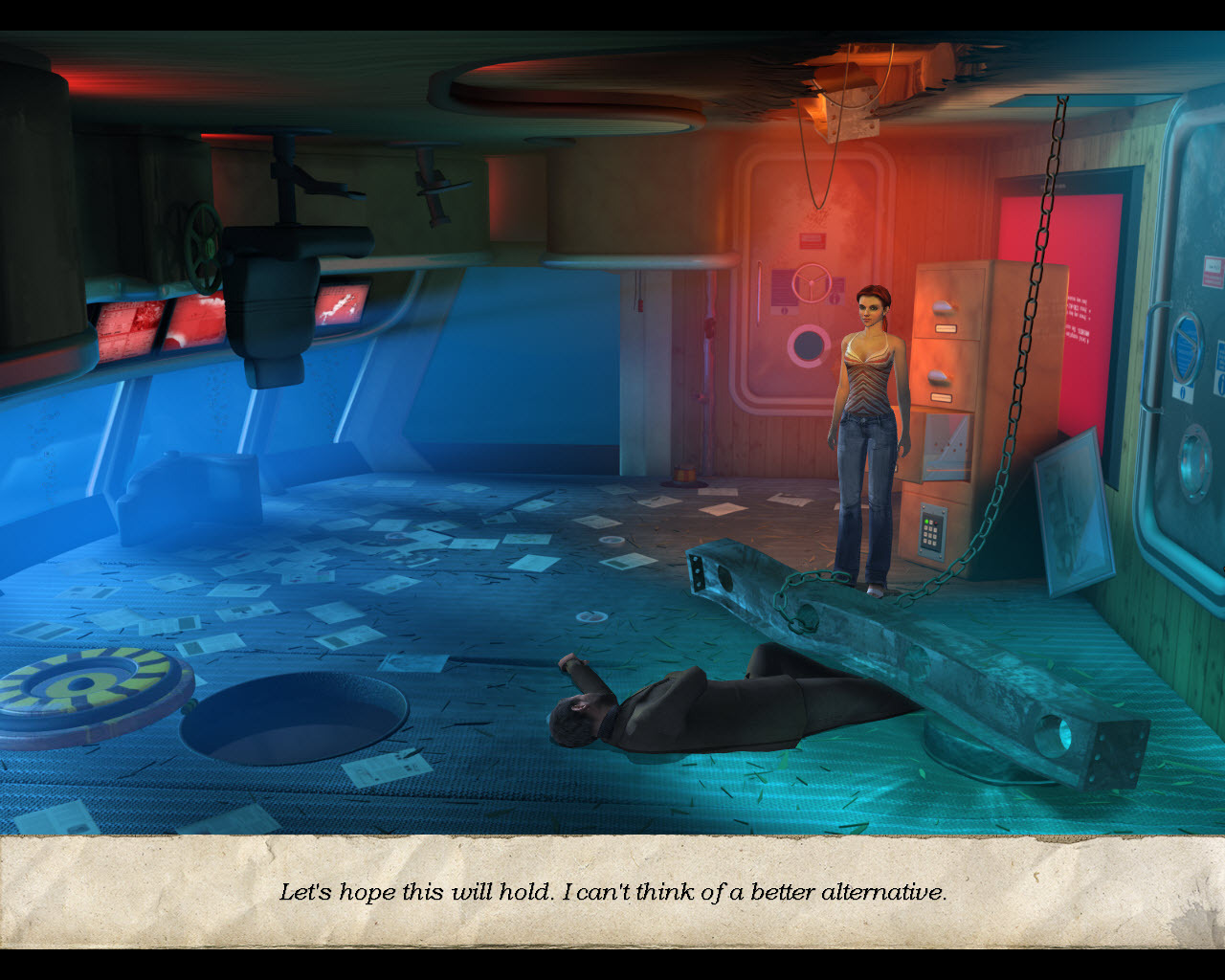 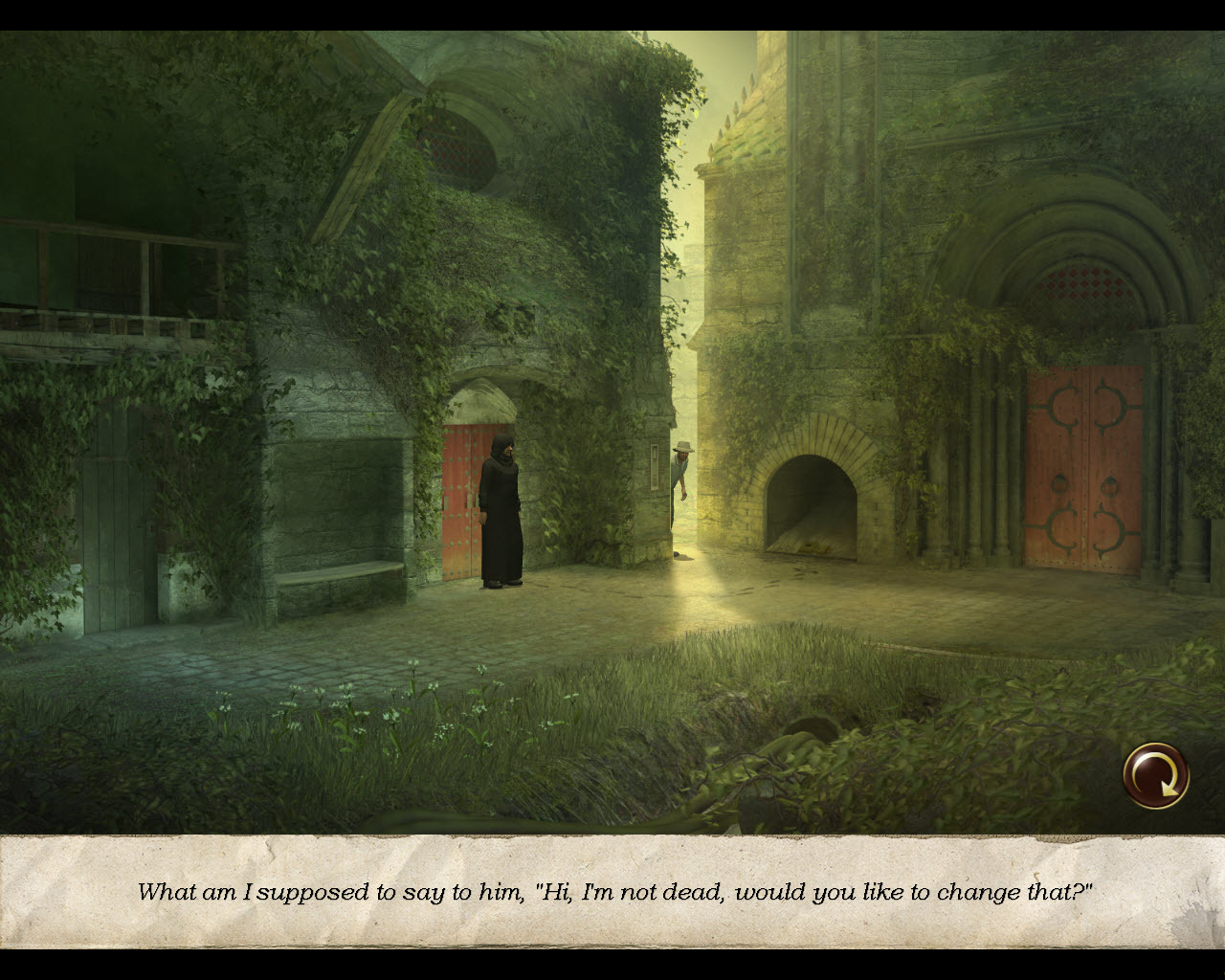 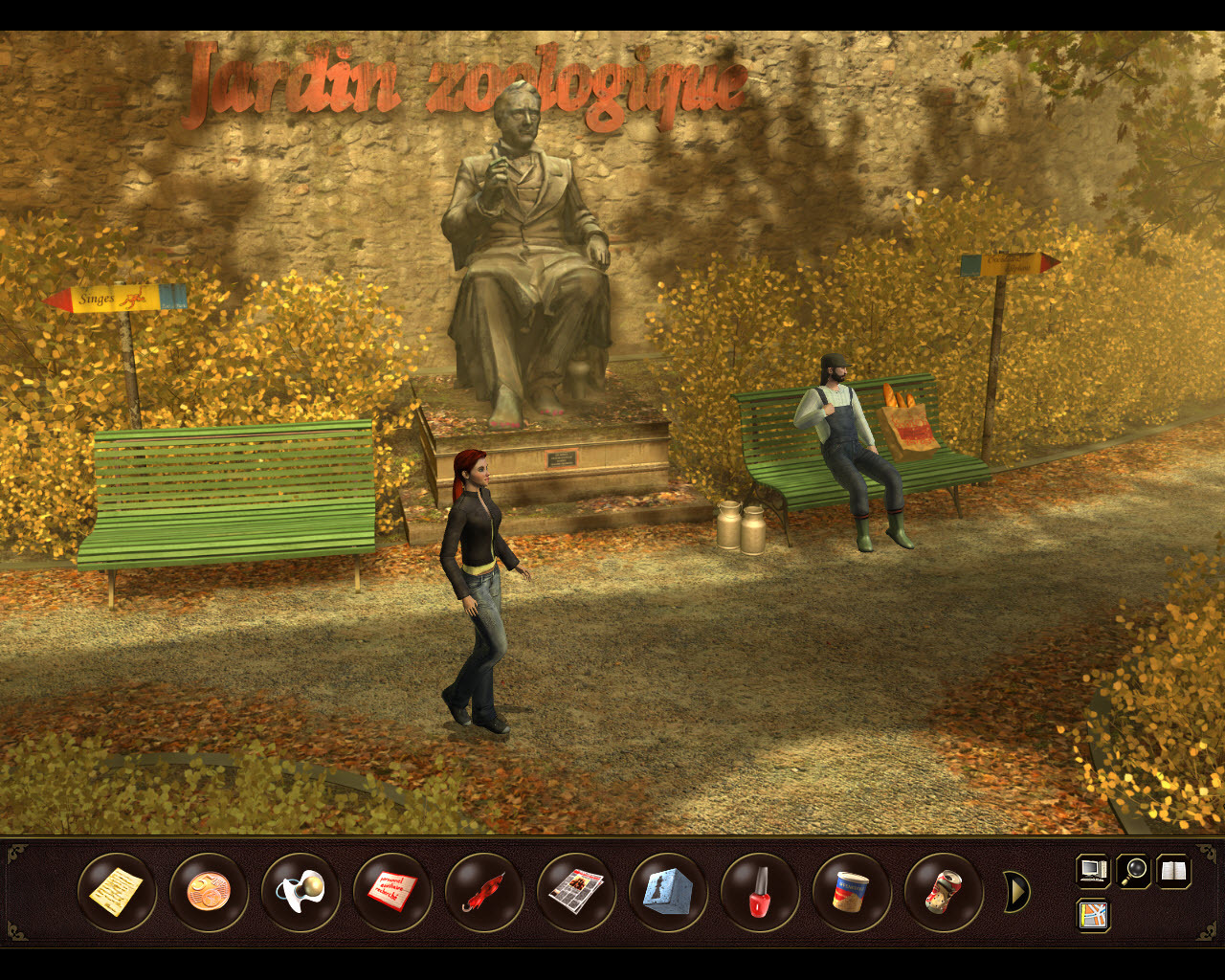 
Story was good.
Voice acting of non-main characters was good; for some reason, ALL main characters voice acting was very poor. But it may have actually been the writing not the acting...couldn't tell. Also could be related to German -> English translation.
Puzzles pretty good.
Some nicely drawn scenes.
Graphical glitches here and there...not many bugs found.

I would only recommend this for adventure game fans of Secret Files and\/or the developer (Animation Arts). Otherwise, it is just too bland. As such, my general consensus is Not Recommended.. Good game though it seems pretty budget to me. Totally worth your while if you get it with a 75% discount.
. TLDR: A low-quality point and click game with an awful story, terrible voice-acting and puzzle design that averages on poor. Only really recommended for those that loved the original game or are really desperate for an adventure game; and only then on a sale.

Long story: You play as Nina and Max once more, but after they have apparently broken up. Nina bumps into a guy minutes before he horribly dies, only to find that she has gotten his luggage by mistake. Cue secret sect which threatens the world and you have the makings of the most clich\u00e9 story ever. Now, there is nothing wrong with a clich\u00e9 story, as long as the details make it come alive and the characters make it memorable. Secret Files 2: Puritas Cordis does not do that. The story is awful from the start until the very end. It does not seem to know whether it wants to be a more serious game (like Broken Sword which is seems heavily inspired by or is trying to mock\u2026 I don\u2019t know which) or a light comedy\u2026 but the \u201cif this was a computer game\u201d jokes clash badly with the scenes where we are supposed to believe Nina is scared or feels guilty. It\u2019s all a mishmash of different tones. This may in large part be due to the horrific voice acting. Some of the side-characters are fine, but the ones for Nina and Max are atrocious. Nina\u2019s voice actress does not seem like she could hit a right intonation if it bit her in the throat. She butchers every half-decent joke the script throws at her. Max\u2019s actor instead seems to have been told \u201cspeak slower\u2026 and douchier! No douchier!\u201d The only saving grace is the fact that you can skip dialogue and cutscenes; if not for this I would not have finished the game at all. However, this still means that you\u2019ll be skipping most of the dialogue and whatever atmosphere and hilarity they were trying to convey.

The puzzles then. Some of the puzzles not related to items are actually quite nice. Nothing too challenging, but good fun. The item puzzles are a bit more problematic. They are often obtuse or suffer from the same adventure game logic as other games in the genre (i.e. many puzzles should have been solvable with other objects), but that\u2019s okay if not great. The real problem is that the game loves throwing a ton of items at you, but rarely explains your goals very well. This means that you are almost always combining items without any clue or reason why, and you\u2019re forced to try them out randomly at whatever spots are available. It was exceedingly rare for me to feel like I was actually planning my actions in any logical sense. For example, on the boat you are supposed to build a European monument, but while you are given some cities from which you can build, you are given no examples of monuments from those cities. Maybe you know them all, maybe you don\u2019t. Personally I had not visited the city from which the correct monument was from and only built it by randomly combining items. No thought, no plan required or even encouraged. The game is full of that kind of thing. The worst of which is probably when you are supposed to get a street cleaner to clean the street by getting him wet. *SPOILER* You do so by getting an alarm to go off which makes a guy run there, which makes his friends drive by and miss him, which makes them turn up on the bridge, into the puddle which makes the guy wet. *END SPOILER*. The solution would be fine, if there was any indication that this is what would happen if these events were set in motion. Instead the only reasonable way to figure it out is by doing everything possible with your items at the different locations and hope for the best. That is not good puzzle design.

I will not compare Secret Files 2 to the original game, because frankly I don\u2019t remember it that well (though if I\u2019m not mistaken they liked to drown you in items there too), but I did like it well enough to want to try the sequel\u2026 but only if it was on sale. Apparently I did not like the original so much that I thought the sequel must be worth 10 Euro. And I was right, it isn\u2019t. In fact, I\u2019m not sure it is worth the 2.5 Euro I paid. It\u2019s not an awful game. Puzzlewise it is a very standard adventure game, not special in any way. It just happens to be coupled with a boring story and main characters which are either bad in of themselves, or are just made so by their horrific voice-actors. Anyway, I can\u2019t recommend the game unless you are deeply in love with the series or desperately want an adventure game. But even then, there are definitely better ones out there.. I was really glad when the game started and the voices were different. But, while in the first game they were insufferable (cheery and full of excess energy without reason), in this one I still needed some getting used to them, because they were on the opposite end of the spectrum: They were totally bland and made the characters seem apathetic. I was expecting Nina to utter "Why do I even bother?"!

There was again a plethora of riddles (logical and illogical) and I've found it a bit refreshing actually, that half the game seems to have mundane, every day objectives. When we get to the grand ideas and plots many games (as well as this one) lose their charm.

The dynamic between Nina and Max is better in this game. As their relationship is already established from the previous one, we get to see how it evolves. Oh, and Max has become way more handsome! :D

What I didn't like was the casual misogyny. Of the 4 women in the game, 2 were playable characters (Nina and Sam), the 3rd (Katharina Jordan) was described as a "bimbo" from Nina, (also Sam mentions another "bimbo"), and the 4th (the police officer in Paris) as "average in all respects", and "ugly". Way to go Nina for your stance towards other women!

Also, breaking the 4th wall can be fun, but Nina kinda overdid it. Too many references that we're playing a game. We know we are, so enough already...

All in all, it is a more than decent game, and I even liked it quite a bit more than the first one.. I love this game! I guess at first it was odd with the different voices than in Tunguska but still really fun to play :). I finished the first Secret Files on the Wii, and I have to say that Part 2 so far is much nicer. The graphics are much better and the controls on the mouse are much easier to use. I like how the game ties into part 1 nicely.

Hopefully that should be most of the major game interrupting bugs gone. I have people helping find the crashes, so that should hopefully get sorted out too.


Your saves should work fine, but if they don't, feel free to send it to me and I can take a look, if I can duplicate the issue I should be able to rescue it.
Save game location: C:\*Your PC username*\Tower\AppData\LocalLow\Stardog Games\SÆLIG
Email to: contact@stardoggames.com


If you continue to recieve random crashes, flick me an email and we can talk about using the debugging build to try and find the cause.

If all goes well and there aren't any major bugs, the next patch will mainly contain new stuff as well as optimisations. I will be working on renting out houses, travelling families (and more), trade agreements, herbalists, production automation, and some other stuff. Beck has also provided me with some new 3D content which will be added.


Sorry for releasing another small patch. I really wanted to make a few changes though, so here we go.


Not much, I know, but every little thing helps.

So Early Access is now available, but I must stress that you should only buy this if you want to support the project and you're happy to play a game that is still heavily in development. You will encounter bugs, some of which could be very bad and break your game and saves, and you will encounter incomplete mechanics. In some cases it might not even work on your computer. :(


If you don't like it or you encounter some major issues, please don't forget about refunds. Refunds are good, and I encourage you to obtain one if you are dissatisfied.


Thank you all for your continued support, and I hope you like it.

A new small update has been released.


Cheers,
Stardog.. Update #16 - A plethora of delights:
Well this took far too long to get out. Sorry about that!

This update is pretty substantial, but it shouldn’t have taken as long as it did, I was a bit overwhelmed with setbacks sadly. Anyhoo, I’m back on a roll again and have decided that I would much prefer doing smaller updates more frequently rather than big ones every once in a while.

Save Compatability
In some cases, on loading your saves from previous versions you might find you are missing a building or two, and some building and cart upgrades. This is due to the huge reshuffle of buildings and while I tried my best to avoid this issue it is still there. So just keep that in mind.


Linux
This update includes a Linux build that has had very limited testing. Send me an email (contact@stardoggames.com) if you’re interesting in doing some testing and do not already own the game.


New Map
I have previously stated that this update would include a new map. In the interest of streamlining this update I have not included this. The new map will come in a separate update that I will issue alongside standard updates.


Cheers for all your support!