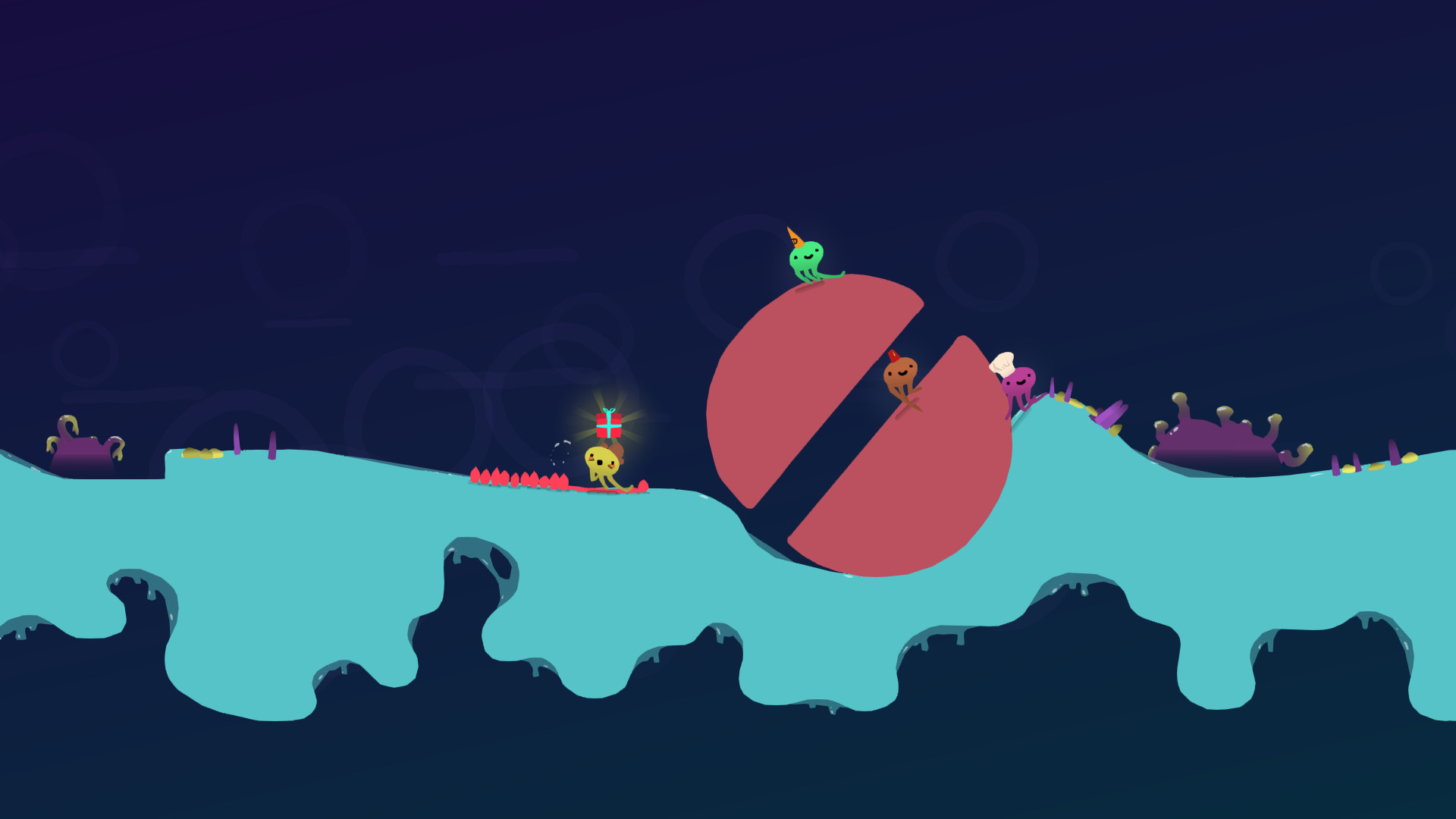 One octopus party, one shiny present, up to 4 scrambling podes ready to race for the right to party!

RACE YOUR WAY TO THE PARTY
Wriggle, jiggle, and squiggle past your friends!

COUCH MULTIPLAYER
Up to four players can squish up on the couch for competitive fun!

BE THE BEST DRESSED GUEST
Express your inner pode by donning a range of delightful hats!

FIGHT FOR THE PRESENT
Kick, boop, slap and jump your way to party-superiority over your friends! 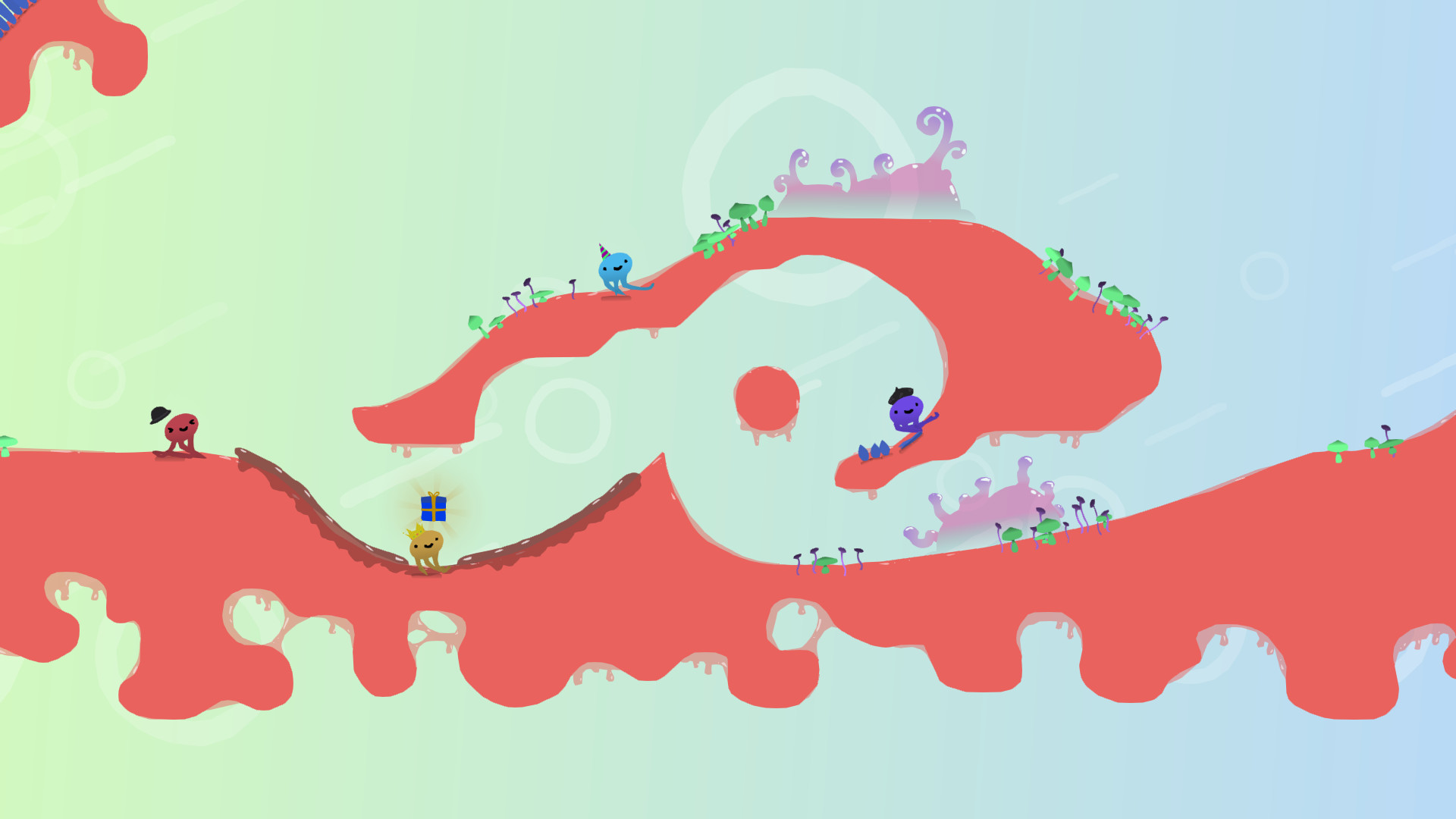 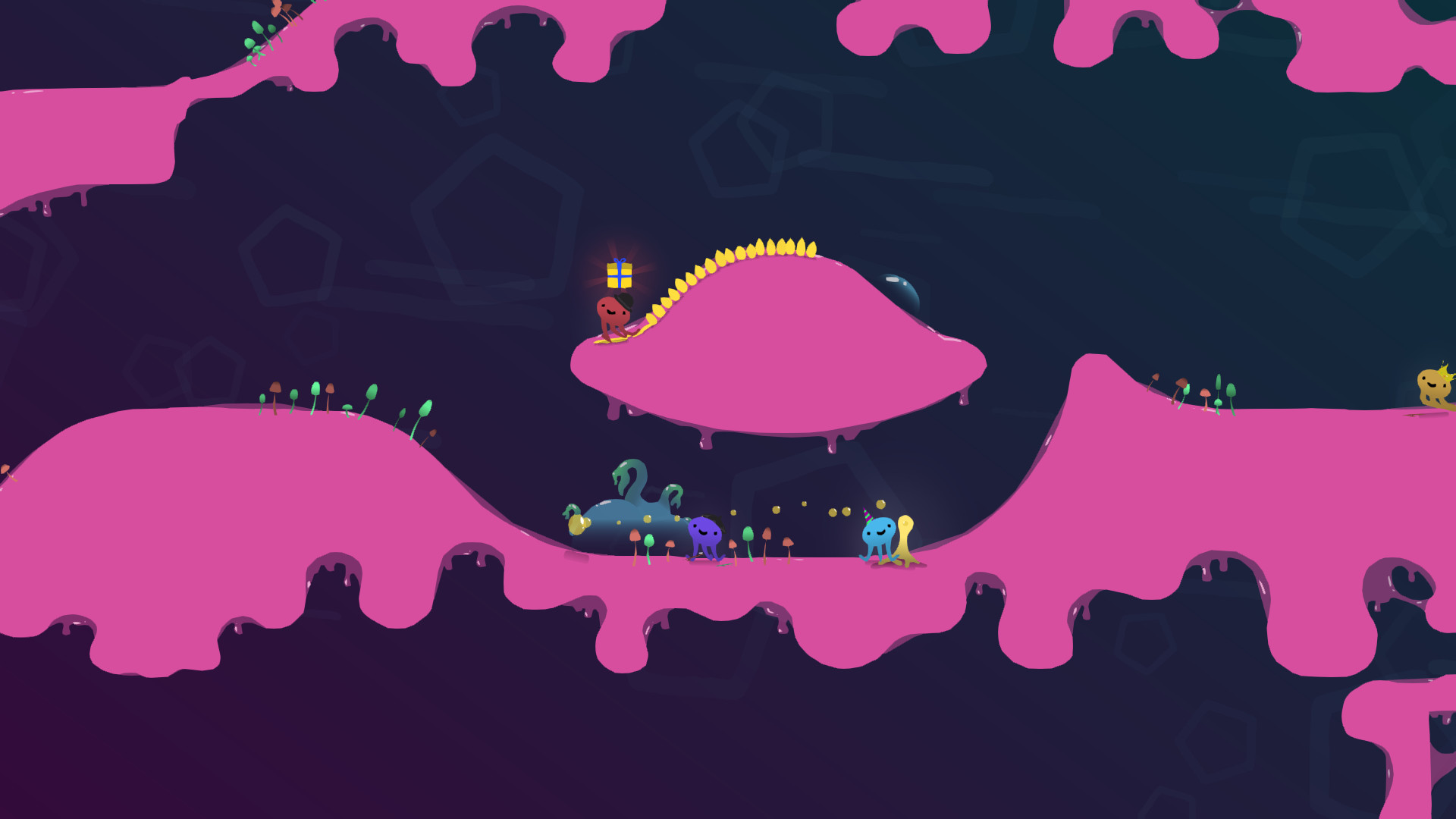 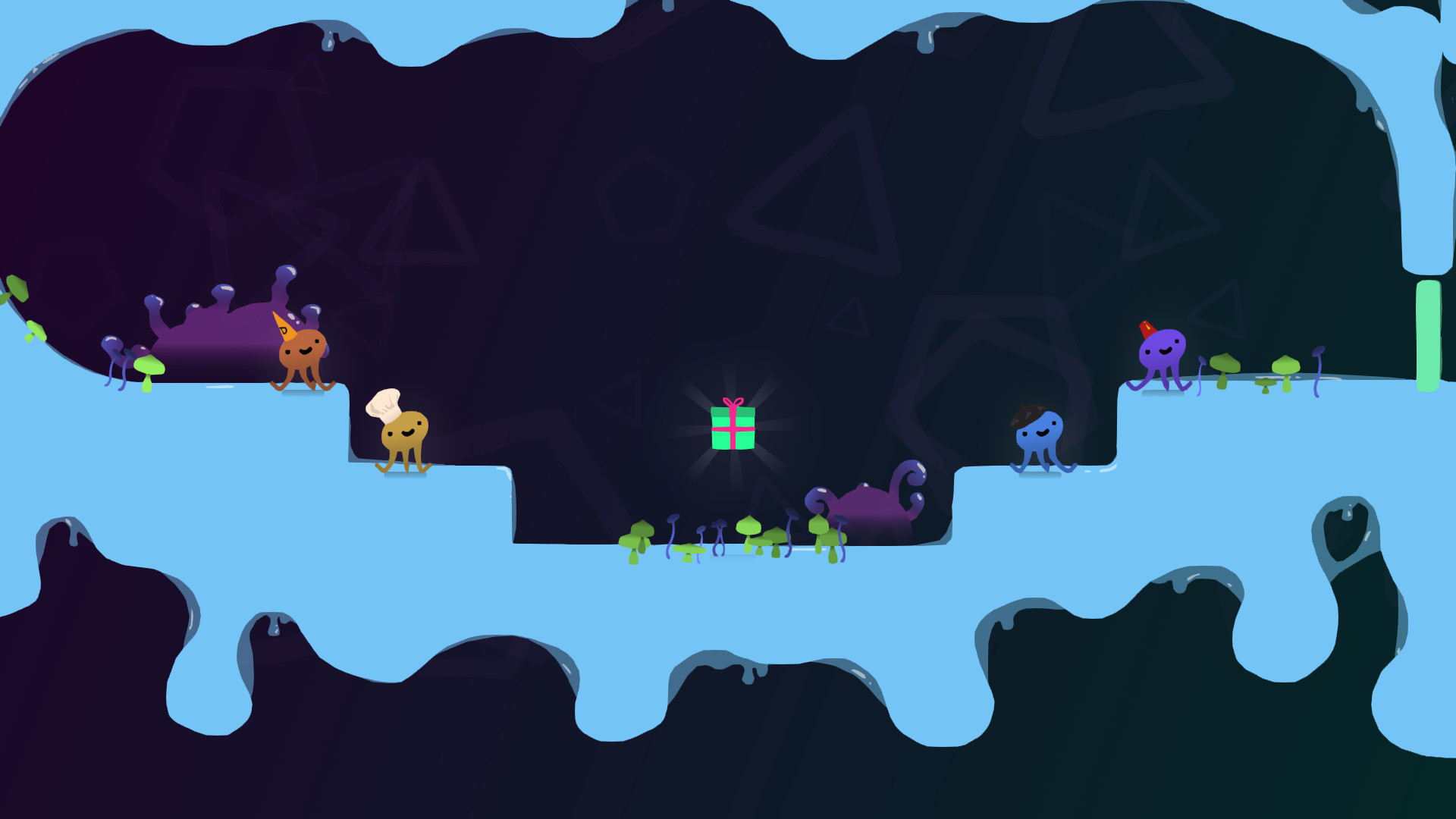 This is an absolute joy of a simple, fun game. There is not much to it: race through a simple obstacle course while trying to gain control of a gift box, but it gets every detail absolutely right!

- It is very easy to pick up, even the nuances of movement (learning how\/when to dash and jump)
- It has a great 'feel', everything has a great "sticky" tactile sensation to it
- The minimal gameplay is masterfully done: there are no "why doesn't it do..." moments
- It has a great visual asthetic
- It is at the perfect price point for this kind of game

Really the only issue is that you will find yourself eventually wishing for more complex maps to race on, but wanting more from a game you enjoy is not much of a drawback.

I purchased this game to play with my 4-year old and she loves it. One of the things I worried about in a racing game for a kid was "what happens when someone falls behind?". Muddledash solves this with a great mechanic where you respawn one the play field, and it makes for some great strategy when playing more competitively with someone older.

Just a great little game that knows what it is and gets it all right.. Muddledash provides a simple concept: race to the finish and enter a birthday party with a present. The simple controls and immediately clear goals make this game quite accessible, which is always a great quality for a multiplayer party game. Additionally, Muddledash sports enough replayability due to ever-changing level lay-outs and the player's ability to adapt to those lay-outs and hone their pathfinding skills.

My only real gripe with the game would be that the respawn mechanics are a bit easily abusable, though this also contributes a bit to the hilarity of a regular game session. Other than that, the game could use some unlocks and\/or additional modes in the future; short-term replayability is great so far, but I worry that in the long run players might get bored of the options at hand.

When it comes down to it however, you will definitely get your money's worth - certainly at the current price point - as Muddledash provides an accessible game experience that still manages to entertain even after 20 successive rounds.. Part of the "My Girlfriend's Games" series.

"Oh my gosh, hats!" "Too competitive, but the Octopuses are really cute." "You can pick your own colors too!"

Best with four players. Can't beat it for the price especially when it's on sale. Controls are extremely easy to pick up.

9\/10. Great party game! The art style makes it significantly more accessible for non-gamers than let's say the one in Speedrunners.
The respawning system makes the whole match tense, and map elements like grass and shooting flowers are sprinkled just right throughout.

Highly recommended!. Discovered it at EGX last year, absolutely our game of the show. Bought it on release and already been falling over laughing playing it.

A fantastic little party game and I am surprised how low the price is too!. I was recommended this game from a friend and it is every bit as fun as it looks!
It's a simple party game that is very intuitive and so everyone can just pick it up and play. I would especially recommend this game if you like games like Speedrunners or Rayman Legends as it is on that level of speedy platforming fun for you and your friends! The game looks amazing too and has a great soundtrack to boot. It's probably one of the best casual party games I have ever played.
Only downsides would be that I sometimes encountered a little fps drop, but not sure if that happens to everyone. It was quite minor so didn't take away from the experience.
9\/10