Two stories, two main characters, one epic experience: in Memoria, players travel through different time periods, while following two distinct protagonists: Sadja, a southern princess who wants to be a war hero, and Geron, a bird catcher who wants to lift a curse from his girlfriend. The game combines point & click gameplay with unique magic skills.

Sadja, a Southern princess, has an unstoppable desire to become the greatest hero in history – by joining and succeeding in the biggest war Aventuria has ever seen: The war of the Mages, fought in the middle of an uninhabitable desert.
Bird catcher Geron lives almost 450 years after the Great War. Geron’s eternal love, Nuri, has been turned into a crow by an evil curse. To give her back her human form, Geron needs the help of the mysterious merchant Fahi, who has magical powers. But Fahi is only willing to help Geron if he agrees to solve a puzzle which Fahi has seen in his dreams. The quest for answers soon leads to a chain of events that connects both Sadja's and Geron's stories, threatening to turn the present into a grim reflection of a long forgotten past.

Memoria combines classic point & click adventure gameplay with the features of The Dark Eye, one of the most successful RPG universes known in the fantasy world. Point & click adventure game puzzles get a unique twist by adding magical features – and a wise, talking staff. Over eight chapters, players control both Sadja’s and Geron’s fates, involuntarily interacting with each other and bridging over 500 years of time. Each chapter in Memoria features opulent graphics, epic locations, a thrilling fantasy crime story and a unique puzzle design that differs from chapter to chapter. 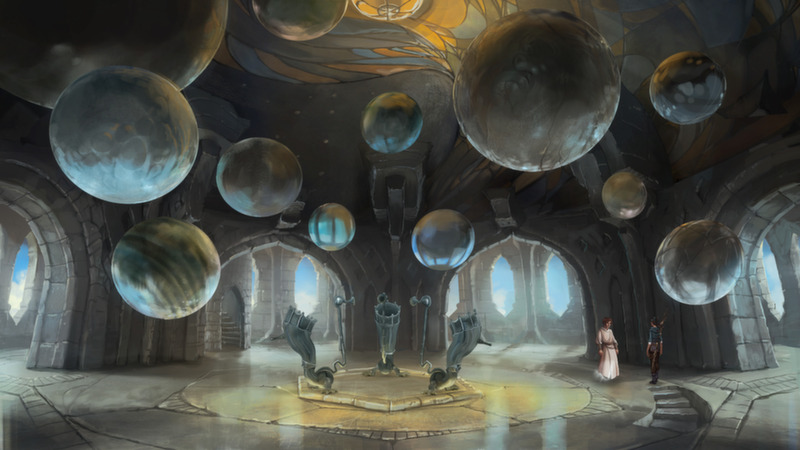 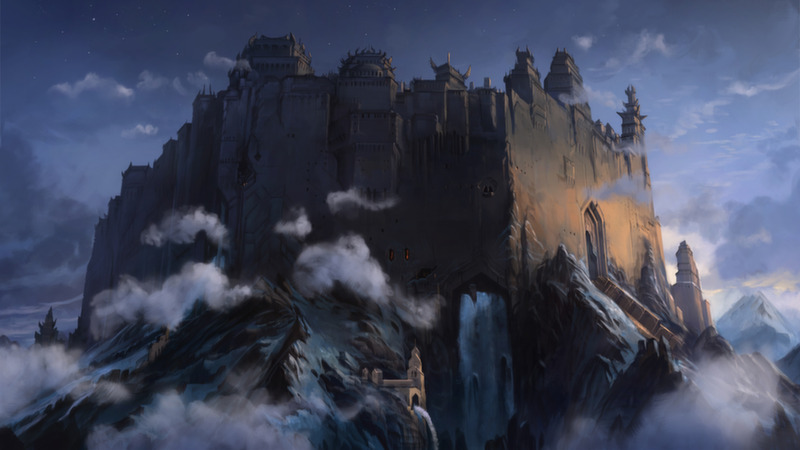 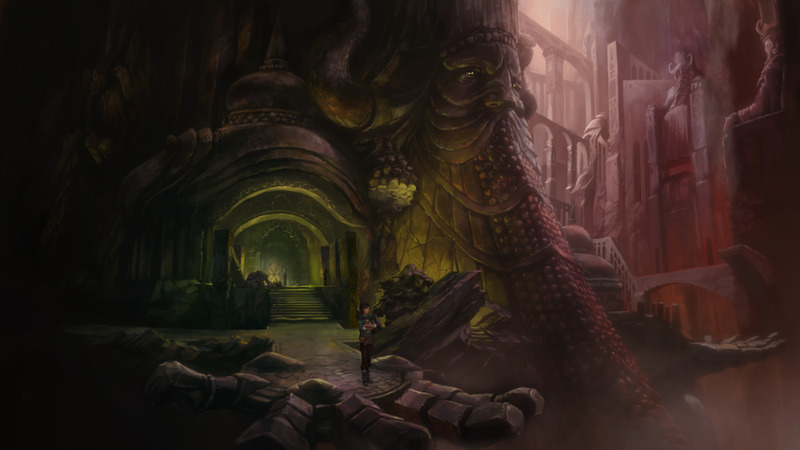 What a brilliant sequel to Chains of Satinav. While it started a bit slow and seemingly about two separate groups of individuals from different times, but it didn't take long to get me engrossed in the story and characters. I played the whole thing in one sitting - I just had to know what happened next.

This is a tragic love story at it's heart, and yes, I cried. You should probably play Chains of Satinav first for the backstory of Geron the bird catcher and Nuri the fairy, but you won't miss anything in terms of plot if you were to start with this one as it tells a separate story.

If you like point & click adventure games and are after something a bit serious I highly recommend this and Chains of Satinav, and I hold these in much higher regard than some of Daedalic's other works (perhaps it's just me, but I couldn't stand the protagonist in Deponia and I felt that the characters in The Whispered World just fell flat).

These games have also got me interested in exploring The Dark Eye universe further, which is a role-playing game from Germany along the lines of Dungeons and Dragons.. The story continues from the first game before it, to get a full picture and emotional ties of what is going on your going to want to play and should play The Dark Eye Chains of Satinav, as it relates to the story and without playing it you will have no meaning to what the person is talking about. Both games are worth it. The artwrok is fantastic, water colour paint drawn in detail out of a fairy tale, with every detail and item done with detail like the game before it, even conversations with NPCS, are done in detail with moving characters that come to life and shown in first person, I bring up fairy tale because that is what comes to mind, those wonderous books you read as a child come to life in this game.

Gameplay is point and click with inventory system and magic use, puzzles and events and conversations are logical and won't have you doing some abstract picaso or infinate staircase riddle that has you smaking heads and every thing mostly fits.

Voice and sound are great, coming from a european maker, you actually get the feel of medievil europe and fairy tale setting then you would from a western game,

I can find no fault in the game and everyone should own it, it reminds me of the games of old, like Syberia were story and art fuse to create something you have not played before, honestly it did what few games could do, allow me to feel like I was playing a fairy tale or reading one, something I have not felt since I was a kid. 5/5. Some say there are only seven story plots in the world. Most narratives tell the same story with new decorations and names. This is a story you haven't heard before. A rare treasure.. After playing Chains of Satinav I fell in love with The Dark Eye universe.
Could not stop playing at all and only slept when exhaustion forced me to.
I really can't express my feelings for this story because it is so amazing.
The ending made me cry like a little girl. (in a good way c:)

If you liked Chains of Satinav, you simply SHOULD play Memoria, for it would be a great sin in the sight of the Twelve not to play it.
. This game was amazing. The puzzles were a bit too hard sometimes, but they were solvable. The graphics are gorgeous.

And the story was absolutely amazing.

9/10. This is one of the best point and click adventure games of all time. It is set in a sort of medieval fantasy setting that is precariously balanced between darkly goofy and quite serious.

The preceding game The Dark Eye: the Chains of Satinav, while not as good, should be played first to get the background of some of the characters.

The first game had great art, and decent voiceovers, with some nonsensical puzzles, and some good ones, and a relatively generic story.

Memoria however has an amazing story. It focuses on new characters, while still developing the characters from the previous game. You learn a lot about the gods and magical nature of the series' universe. The ending blew my mind. It's like Primer meets Lord of the Rings.

I could go into greater detail about the story but there really isn't any point. If you are a fan of point and clicks, and that sort of old fantasy style, like King's Quest or something, then play this series, even if you have to push through the first one, it will be worth it. The puzzles are slightly above average. But the story is really the highlight. The art is great too. The voiceovers are fine, some lines had stale delivery, but you definitely become acustomed to the voices by the end of it. It's probably the best adventure game of the past decade.. i would definitly recommend this game, plus it would be great if more Point&Click games are created in Dark Eyes universe.. After being absolutely blown away by The Dark Eye: Chains of Satinav, I was very excited to continue the journey into Memoria. This game is fantastic; it retains that epic, big quality that Chains of Satinav had. While I do love this game, I have one personal nitpick...Lets get it out of the way before I gush my love.
In the prequel, we follow Geron and Nuri. I fell in love with these characters, and although the ending was bittersweet, I would have been content had it ended there. However, we see them in Memoria, as Geron is hoping to change Nuri back to her original form. This goal leads him to learn about Sadja, who is the heroine that Memoria centers around. Sadja is an amazing heroine and her story is incredible. The more I learned about Sadja and her quest, Geron and Nuri's quest seemed less significant, so by the time it was time to settle the ending for Geron and Nuri, I wasn't as enthused as I knew I should be. I quickly resolved their story, just so I could see what happened to Sadja, because that was who I really cared about in THIS game. Now all the good stuff, and there's alot.
Just like Chains of Satinav, it is gorgeous. It's more of the beautifully hand-drawn backgrounds and characters that we love. The cutscenes are also breathtaking. The look of this game gives it that epic feel. The voice acting is superb. The soundtrack blends itself perfectly to the look of the game, bringing tears to my eyes in places.
The characters are well done, but the ones that stick out are Sadja and her magical staff. These two make the game. Sadja is everything one would want in a good heroine. She is strong, resolved, caring, feisty, and dramatic. Her magical staff is a perfect balance for her: witty, supportive, concerned, and loyal. I have never rooted so hard for a princess to end up with an enchanted object. They are a perfect team, and the love and loyalty they share is felt and is truly the heart of this game. Seriously, the ending had me in tears.
As far as mechanics go, it is a standard P&C, with some interesting twists. Like in Chains of Satinav, you can perform magic. There are 4 spells you learn and will use throughout the game. The puzzles are fairly standard. Some are a tad difficult, but the game gives all the facts you need in order to solve them.
I am so glad that I played this game. I know there will be another play through in the future. The story, the look, and above all, Sadja and her magical staff are the reasons this will become a classic.. Best adventure game I have played since the age of the Monkey Island series.
Strong epic fantasy story that will keep you on throught out the game.
Excellent puzzle logic with one of the best hints system that will help you when you are stuck without telling you everything.
Graphics looks superb reminding me oil paintings and sound along with the voices are also of high standards.