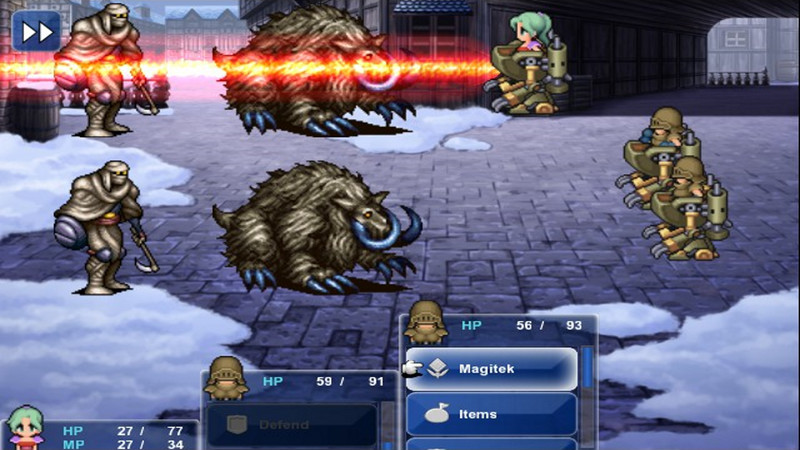 FINAL FANTASY VI first debuted in 1994 as the sixth instalment in the iconic FINAL FANTASY series. Innovations included the ability to play all the main characters as the game's protagonist, and to this day, its epic story intertwining each of their fates is still highly rated and wildly popular.

With plenty of abilities available and the magicite system for controlling spells/summoning, players can develop their characters any way they want. This was also the first FINAL FANTASY game to include the Ultima Weapon, the most powerful sword of all and a recurring item in subsequent titles within the series.

Story
The War of Magi left little but ashes and misery in its wake. Even magic itself had vanished from the world. Now, a thousand years later, humankind has remade the world through the power of iron, gunpowder, steam engines, and other machines and technologies.

But there is one who possesses the lost power of magic--a young girl name Terra whom the evil Empire has kept enslaved in an effort to harness her power as weapon. This leads to a fateful meeting between Terra and a young man named Locke. Their harrowing escape from the Empire's clutches sets in motion a series of events that touches countless lives and leads to one inevitable conclusion. 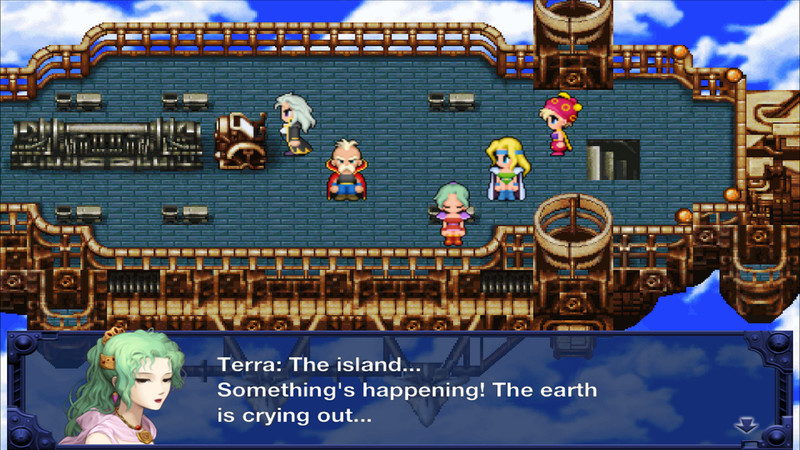 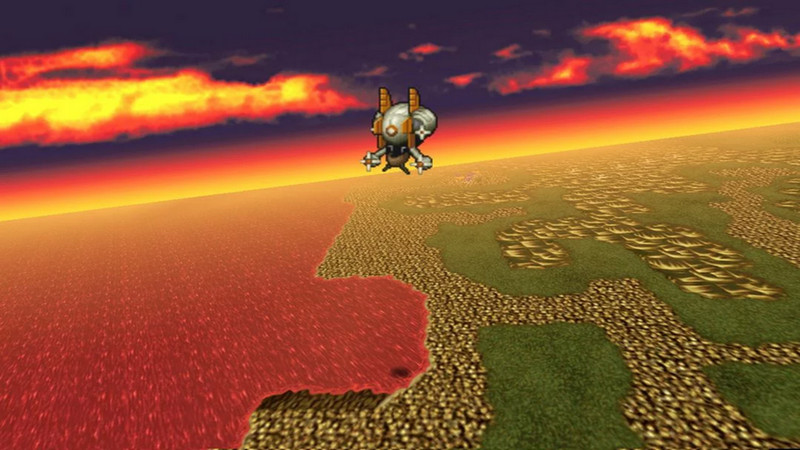 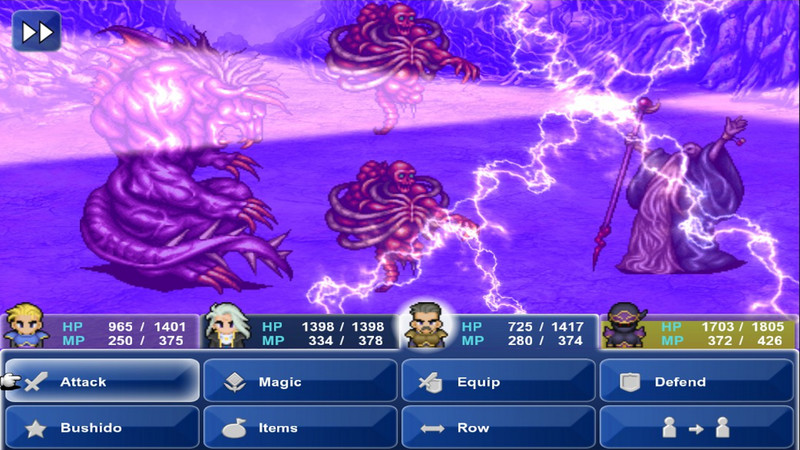 
One of the top\/best games of all time. Played it first and still have on SNES.
Coming from someone who complains a lot: This port is not bad as other reviewers make it seem.
-If you have never played this game buy it.
-If you talk about games and have never played this game....stop talking.
-You absolutely do not need a mod\/patch for this port.

If anything I think the contrast is a little high.
When launching the game on steam there is an option to start in a launcher where you can change your resolution. That is the only, "Must do".
However you can YT a side by side video of snes vs steam versions and it looks very much the same but cleaner and higher definition in this steam port. As an example Terra's hair tie in snes looks like a big pink blob and in this version looks like a hair tie.
Wooo go crazy!!! The injustice to the art!!! *sarcasm*

-Think people complaining are some try-hards with bad opinions you should probably un-sub from. I would bet they never even played in 1994.

***WARNING: Going to go on a HUGE rant about the sprites, interface, graphical look, frame rate, and reviews for this port now***

It seems there is a popular theme on this ports reviews both on steam and in some yt videos. That is people saying they love the game but this port is bad as compared to xyz platforms.
I can't stress enough how absolute NONSENSE that is. This is a great port.

A common theme you will see when people complain or mention negatives is broad, vague, nouns and adjectives. Most do not actually give an example.
What is most bizarre is when there is an example given....and you compare this version with a past version in relation to the specific example....you will be hard pressed to even see a difference....especially in a negative way.

So what im sure has happened here is largely based on a buncha posers. We all know people like this. I have friends like this. Good people, they mean well....but they are a buncha posers. Its people who are very passionate about the game(s) or at least want to portray themselves as very passionate about the game. So they get on the internet and read some forums. Notice a person said, "Hey these are different, this is ugly, this is bad." and then they just run with that concept. It makes them feel like they have some superior knowledge of the game. As if their connection to the game is so superior they have to bash it because someone else who appeared to be passionate about the game said something about it not being a true experience. The seeds of a fringe community.

It is 100% a non-truth that has just been regurgitated. Look at the game. Actually look yourself. Try to point to something specific as a comparison. Such as x thing about x character or x place in x time and x about it. You don't see stuff like that because it is a non-issue. As I mentioned...Terra's hair tie ...now looks like a hair tie. Edgar now looks like he has.... hair.... instead of a raccoon tail hat. Everything is less pixelated yet still pixelated. Someone mentioned frame rates....I can't even take that seriously. We are talking about a game that played on a 16 bit system. For the record I am 0% bothered by the frame rate. Start the launcher, put it in full screen, and up your resolution. Someone mentioned how the steam version ruined the intro to narshe and how it use to look much more scary, uninviting, and gloomy. IT LOOKS NEARLY IDENTICAL!!!! LOOK AT IT!

The interface....looks almost....exactly the same. You have some options to use a new bottom to top rising bar for combat. That is just insanity!!!! HOW DARE THEY give you the OPTION to use new stuff! *face palm*
.....you can use the original.

100% people making crap up to seem like an OG wizard. 100% people trying to be part of some fringe you cant sit with us community. Very off putting to the majority looking to possibly buy this on steam and enjoy one of the best games of all time again but not join some society of supposed purists.
I almost didn't buy this because of these reviews.

But then I did the research myself and actually looked. I watched the direct comparison side by side yt videos and used my own eyes not any of the comment sections.
I also looked into the popular mod for the game. #1 mods from off steam not on curse or twitch are kinda sketch. Not saying this mod is but who knows if you happen to find it on a bad site. That's a huge pain. #2 In my opinion it's the mod that looks too different compared to this port. I like this port better than this "must have" mod. No disrespect to the creator, it seems they have spent an insane amount of time with it. What they made is incredibly good. I would recommend it if you want a different experience. But if we are going to sit here and compare snes to steam port to mod steam port.....I am happy with the 0 extra effort to keep the port stock as is. 100% mods NOT a must have.

I still have my original snes cart, box, everything that came in the box, peter olafson guide, prima guide, nintendo power guide, issues of nintendo power featuring ff3, snes system, controllers +turbo stick, bazooka gun, and mouse. I'm physically sitting here looking at them...and looking at this port....
If you aren't a poser or looking to be part of some fringe community you will love this port and have nothing to worry about.. Greatest FF of all time. One of the best JRPGs of all time. Spoiler Alert!!!

Nope, this is not the Final Fantasy.. So, I'm a huge fan of the Final Fantasy series, with my first one being the fourth one. This one, I can say, is probably the best one out of the entire series. Wonderful story, great cast of characters with a plethora of character development, and a fantastic battle system with interesting mechanics from each character; not one character is the same. Each character has their unique traits and techniques that make them stand out on their own. Also, there's a grand total of 12 base playable characters and two optional: Terra, Locke, Edgar, Sabin, Gau, Shadow, Celes, Cyan, Setzer, Strago, Relm, Mog (yes, a Moogle as a playable character), and the two optional characters Umaro the Yeti and the Mime from Final Fantasy V, Gogo. There's so many types of play styles you can do with this many characters to choose from and each sporting a special command. Now, onto the main review

+Wonderful story with many on-the-edge-of-your-seat moments.
+Fantastic battle mechanics from the diverse cast of characters.
+A true balance of difficulty. Not too hard and not too easy, but compared to the older games, this one is pretty easy.
+The Esper system is pretty awesome. You can have each character in your party equip an Esper and based on what the Esper is, the character can learn magic from the Esper and sometimes get an extra stat boost on a level up.
+In this port, Cyan's Bushido has been improved. No more do you have to wait for everyone else's turn to be in action. No more do you have to wait for his Bushido bar to fill up. You can now select what Bushido you want to use and it does it automatically. Thank you, Square-Enix!
+Tons of bugs that were present in the SNES, PS1, and GBA versions have been fixed.
+Detailed info on Espers, along with seeing what they look like without having to summon them.
+Graphic-intensity is pretty low, so basically any computer you can get today can run this game without any issues.
+Character portraits are really nice. They look like tuned-up versions of Yoshitaka Amano's original drawings.

-The art style for the character sprites are pretty terrible. The male characters' chests stick out almost like they have breasts and it mostly looks like they were redrawn from a SNES emulator set with a graphics enhancer.
-Screen resolution is locked at 1360x768, so no 1080p here.
-Menu interface is pretty bad, as this was lazily ported from the Android\/iOS version with touchscreens in mind. Lazy Square-Enix; you fix Cyan's Bushido, but can't make a comprehensive interface for your PC port?
-The 8-way movement feels stiff. It's best to have it turned off.

Overall, this is a fantastic, albeit a lazy port of Final Fantasy VI. If you are are itching to have a copy of this amazing game for the PC, I would pick it up. Don't be turned away from the poorly drawn character sprites and be happy that you'll be getting an almost-perfect port of one of the best JRPGs out there. This version is pretty damn close to being perfect in my eyes.. First fight in Narshee, I want to kill Terra and clear the town with Big and Wedge only just so she doesn't gain any exp and levels. I want to do a perfect game by leveling my characters with the espers that gives the best stats, so I need to do a low level game until I get the airship in 2nd world, just like I did with the snes version a long time ago.

Now in the fight, I said to myself what the F is that stupid interface. Why do I get an interface as if I was playing on a touch screen device. Then I tried to cast Fire spell with Terra on herself: WTF, I'm not even able to target herself. I try to find some setting in the config menu to make the interface like the original and be able to do my thing. No, there's no option for that.
So the game is built with an incentive to stay low level to get the most from your espers when you level up, but at the same time they remove our option to kill ourself. So I need to wait 5 min for the ennemy to kill my character?