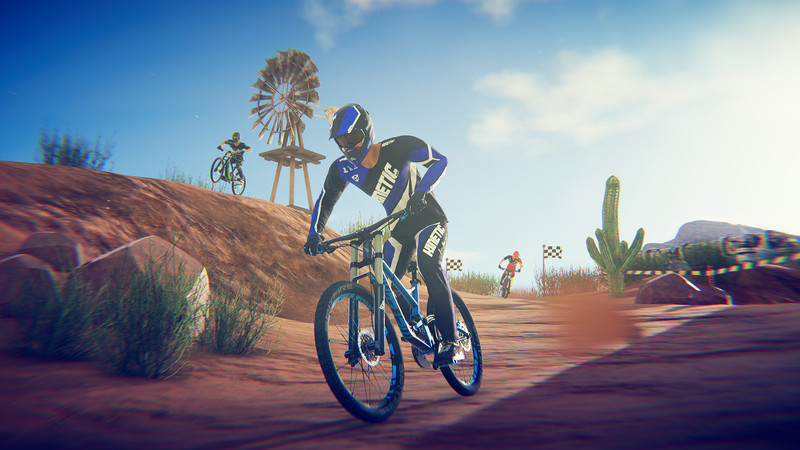 From the developers of Action Henk, Descenders is a fast-paced extreme downhill biking game that's easy to pick up, but difficult to master.

A Modern Take on an Extreme Sport

Pick a Team, Become a Legend

In Descenders, your team is your life. When you pick a side -- Enemy, Arboreal or Kinetic -- you'll be bound together with other players who choose the same side as you.

Grab your bike, pick your team, and attempt to live up to the legend of your Descender. Will you join the die-hard, trick-frenzy ranks of Team Enemy, the proficient, off-road stylings of Team Arboreal, or the high-octane, speed-is-everything Team Kinetic? 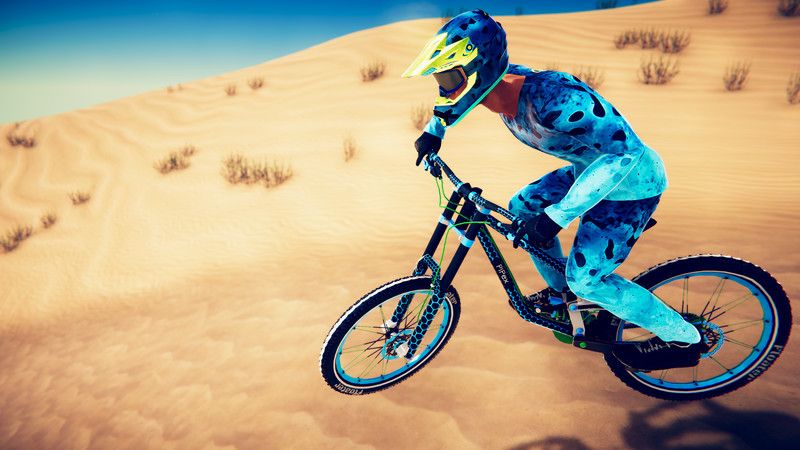 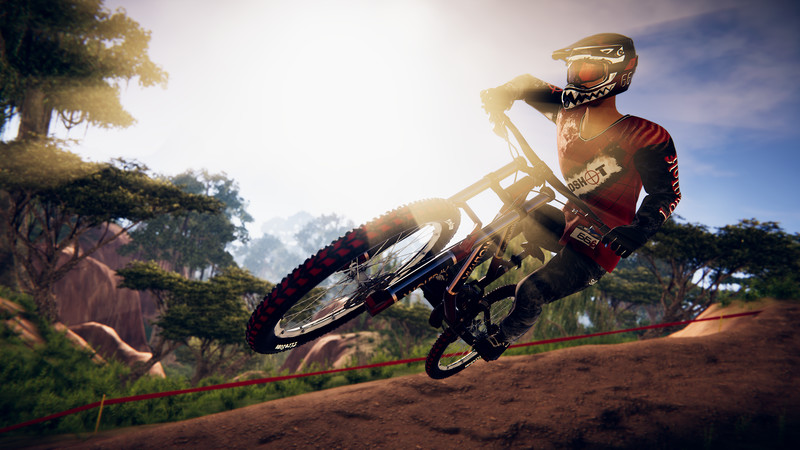 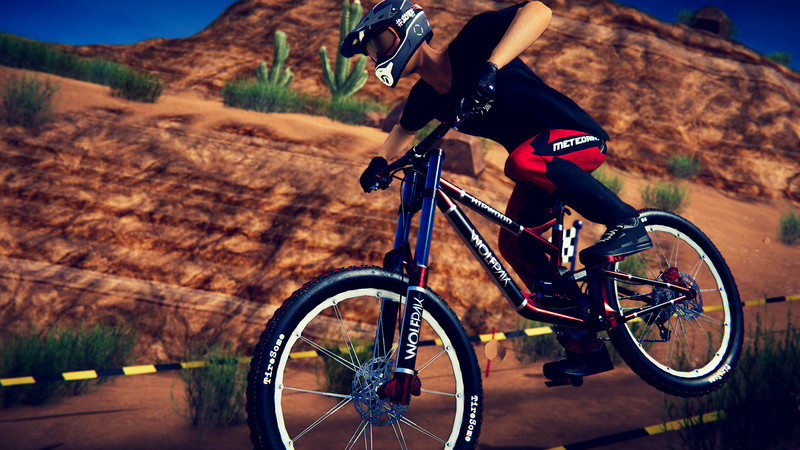 
If you liked carving in SSX Blur (or: "The Snowboard Game"), you'll love carving with your downhill bike in Descenders as well.

Descenders can be summarized as a unique mix of physics-driven downhill biking with a semi-arcadey, but simple trick-system sprinkled on top - finished off with a dope DnB-Soundtrack to listen to.

Once you get into the controls, which feel somewhat similiar to EAs Skate series (do yourself a favor and play with a gamepad), you'll end up smashing face-first into trees, ramps and other obstacles along your path to honing your skills. Roguelite elements (procedural map generation, unlockable stage modifiers by score) give you fresh track-layouts while the sight of multiplayer-riders (hooray v1.0!) encourages you to be more bold and try out riskier tricks. Surviving "longer" (= more stages) nets you some neat cosmetic items to give your rider the proper attire and bike.

If you're more into the thrill of "going fast" without thinking twice about how or where the track will actually lead you, you'll be glad that the game doesn't force you to stay on the procedurally generated path. Descenders gives you enough freedom of gameplay-modes to play the game any way you want: With friends or without, with "lives" (= your amount of tries that you can fail before you're send back to the start of your career) or just casual riding without any pressure.

While the trick-system is not that deep and fleshed out as I'd like it to be (it's basically "hold left shoulder button + hold the right stick in any direction"), the basic downhill-gameplay-loop feels fresh enough to make this game one of the better "tune out and relax"-type of sports-games that also challenge you, if you want to put in the practice\/effort to pull off great runs.

Game feels great, and that's a key point... The gameplay loop is fun, it's just lacking some fluff that would really make it a bang for your money. Not to mention a memory leak issue I seem to be having after extended periods of play (Leaving the application open) giving me a slow incline in FPS over time during the session. This won't effect my rating as I can just relaunch the game, it'll likely be fixed and it shows how much I'm enjoying the game leaving it open for so long!

Play offline (Requires steamworks connection) or online with your friends, just know that although the campaign can be played together, in multiplayer there will be no exp earn't and level skip missions will not unlock the ability to spawn at the desired level like they allow you to do in single player, this means that you can only unlock the cosmetics within the game via playing on your own, also note that 4 of the current biomes are locked behind singleplayer progression, at least if you want to host them for your friends that is. Alteratively you can join someone who already has access to them via the lobby browser. Multiplayer as it is currently is purely free riding, no objectives and no player collision possible. Just you, your friends and potentially a really steep hill\/mountain\/mound. Gotta get down it somehow.

Biggest complaint that I have is there isn't any competitive nature to playing with friends, not unless you make your own rules... No challenges, just free riding down hills. Still a lot of fun having said that, and at least there is some form of challenge in single player if you're looking for that. One of these single player only features is the soft rogue like system, whereby you unlock "Crew members" during your runs, and lose them on a wiped run\/exiting that session.

There are 3 types of crew member that might pop up, A B and C.

So, nothing too crazy in terms of perks, but the random generation of the levels is also done well in my opinion as the tracks always seem to flow well enough... Not that you need to stick to them in this game. You can traverse through the levels however you want to, the only objectives currently in the game are (One shot only) optional daily challenges and the campaign challenges... these only request that you reach the finish line\/optionally complete a small objective like doing 2 360 spins in a single run to gain an extra life. The current amount of obstacles\/hazards is limited. A rolling hay bale being one of the few obstacles. Overall the hazards weren't too interesting and even the last levels in the game (Desert, jungle, Favelas) don't offer much new, hazards are mainly just the product of the different terrain generation in use for the varying types of area you'll be playing in. The terrain does change fairly dramatically throughout the biomes and I've enjoyed speeding through each of them over and over again looking for the path of least resistance at all times + tricks if I can (Successfully landing tricks gives you a speed boost), it can't be understated how much the game nails the feeling of speed... And that's what really makes this special to me.

In short, the core game feels great and it's a smooth experience - There's just a lack of objectives, rewards, multiplayer competition or general incentive to play other than the enjoyment of riding your bike around the place. Here's hoping there's more to come... I reccomend the game, preferably on sale currently (Release) but even as is, just buy the game and refund it later if you want to screw around for a while, think Skate 3 in terms of flow - I'll be surprised if you don't at least have fun for those 2 hours. Enjoy it if you stick with it!. A pure adrenaline rush, excellent immersion and brilliantly designed.
Will appeal to a lot of players from casual to hardcore gamers.
The graphics are great, and probably the most fun I\u2019ve had playing a bike orientated game.
. This game is amazing, it just has to be your kind of game, and you'll spend hours on it. I personally really love it, because of the ways you can play it. Some days i love soaring through the canyon at 90 km\/h, while sometimes i feel more like getting the highest amount of points in a level. The controls are neat for if you are at school, and can't use a mouse, even though i prefer controller. The community is lit, and the devs are active which makes it a very personal game.
And remember, this is the beta we're talking about. Full game coming out tomorrow ^-^

10\/10 would recommend. This game is a perfect example of why you shouldn't let everything up to a computer.

Don't get me wrong, the game is pretty fun but the developers haven't thought about balancing and difficulty. A trend that is pretty common around indie games.

The procedural generation in this game doesn't think about the layout of a level. This leads to corners that are way to sharp for the speed that you are currently going, Jumps that are not perfectly straight and bumps in front of big jumps. All this leads to a pretty meh experience in my opinion. The levels also feel really samey because the system just picks pre made pieces and sticks them together.

I joined a room of another player that was playing on the Glaciers region. We entered the boss level and what do you know. The Boss Jump is impossible because you need a lot of speed and there is a small bump in front of it which leads to you crashing into the jump pad at 100 km\/h. Braking doesn't work because you won't have enough speed and there is no other way to the finish line.

My advice for the developers is to make some levels themselves and keep the procedural generation thing as a second. I'm positive that they can pull it of because outside of the level design, the game is really fun.